1 km on a two-wheeler to an old man in Bengaluru. The young man dragged away: The video has gone viral on social media 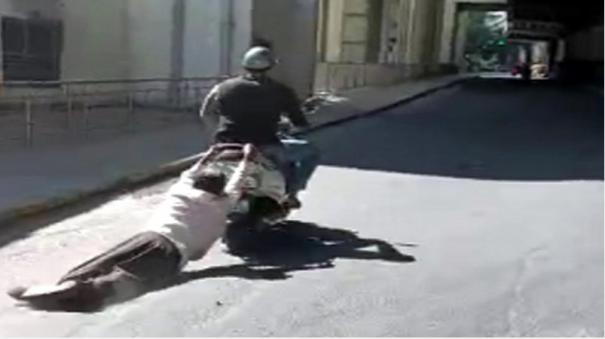 Bengaluru: A 71-year-old man was hit by a youth on a two-wheeler for about 1 km in Bangalore. The incident of being dragged to a distance has created a stir.

Muthappa (71) from Vijayanagar in Bengaluru went by car on Magadi Road yesterday. Sahil Ahmed (20), who was coming in the opposite direction on a two-wheeler, hit Muttappa’s car at high speed. It is said that he had an argument with him and tried to attack him.

Later, when Sahil Ahmed tried to escape from there, Muttappa caught his two-wheeler and tried to stop him. But Sahil Ahmed sped off without stopping his vehicle. Thus about 1 km. Muthappa has been dragged shouting on a two-wheeler to a distance. Seeing this, some motorists chased Sahil Ahmed, caught him and beat him severely. They also rescued the injured Muthappa and sent him by ambulance to Victoria Hospital for treatment.

The Govindraj Nagar police registered a case and arrested two-wheeler driver Sahil Ahmed. He was interrogated regarding the incident.

In this case, the video footage of the incident where the old man was dragged behind the two-wheeler has gone viral on social media.

Muttappa, who is undergoing treatment at the hospital, said, “This accident happened because Sahil was driving too fast. Even when he was wrong, he never apologized to me. He scolded me and tried to run away.