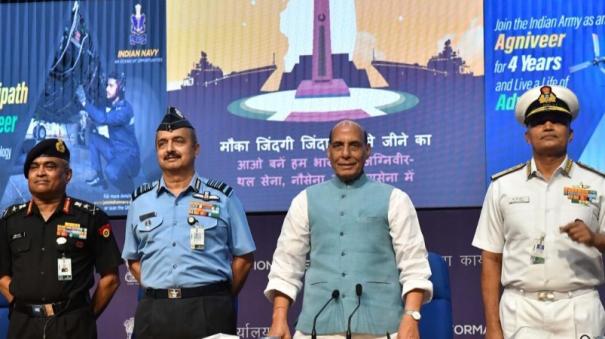 New Delhi: “Defense Minister Rajnath Singh has approved a plan by the defense ministry to allocate 10 per cent vacancies to Agni soldiers who meet the required qualifications.

Earlier, Union Defense Minister Rajnath Singh had on the 13th launched the ‘Agni Path’ scheme, which will employ people between the ages of 17.5 and 21 in the Army, Navy and Air Force on a four-year contract basis. The project was strongly opposed by the youth. In Bihar in particular, a large number of young people who have been trained to join the army are fighting.

The agitation, which started in the northern states of Bihar, Uttar Pradesh and Haryana, spread to Telangana yesterday. Protesters set fire to a train parked at the Secunderabad railway station in Telangana yesterday. A young man was killed in the shooting. A total of 12 trains were also torched across the country, including Bihar. The strike affected about 300 trains nationwide.

Following that, Prime Minister Narendra Modi announced a two-year relaxation of the entry age for joining the army under the Agni Path scheme, raising it from 21 to 23.

In addition, the Union Home Ministry announced that the Central Armed Forces (CAFF), which completes 4 years of service as Agni soldiers after completing the Agni Path project, will be given a 10% quota in the Assam Rifles.

In addition, first batch Agni soldiers will be offered a five-year age limit to join the CAPF, Assam Rifles. The Interior Ministry has said that concessions will be given at the age limit of 3 years from what has already been announced to those who leave in subsequent bat.