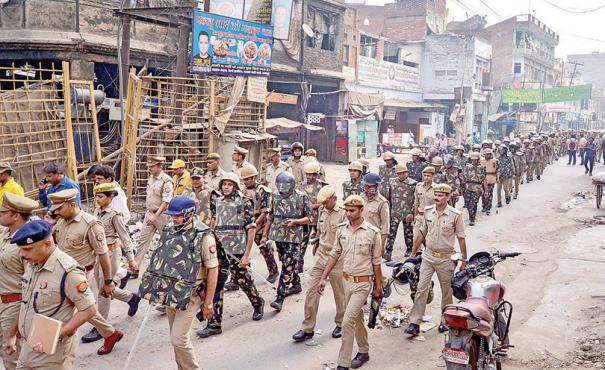 KanpurUttar Pradesh, Kanpur: A case has been registered against 1,040 people in connection with the riots in Kanpur. So far 36 people have been arrested.

In a recent interview, BJP national spokesperson Nupur Sharma was accused of making remarks against the Prophet Mohammad. Condemning this, shops in Kanpur, Uttar Pradesh, were closed last Friday on behalf of Muslim organizations. As many as half of the shops in Kanpur’s Parade Market were closed.

It was in this context that the Muslims, who came out after Friday prayers, were forced to close the shops that were open in the parade market. As shopkeepers protested, the mob hurled stones at about 100 people. Riots erupted as the opposition launched a counter-attack.

Police led by Kanpur Police Commissioner Vijay Singh Meena rushed to the spot. State Armed Police were also called. The first beating was carried out to disperse the crowd. Then tear gas canisters were fired. The riot was brought under control after a long struggle. Many were injured in the riots and police beatings.

Tensions continued in Kanpur for the 2nd day yesterday. Two cases have been registered by the police in connection with the riots. Another case has been registered on the complaint of the victims of the riots. Accordingly, 40 unidentified persons and 1,000 unidentified persons have been prosecuted. So far 36 people have been arrested. Hayat Jaber Hasmi, who allegedly acted as the mastermind of the riots, has been arrested and is under serious investigation.

IPS officer Ajay Paul Sharma, known as the “Encounter Specialist”, has been sent to Kanpur. Under his leadership the guards are engaged in intensive patrolling.

The streets of Kanpur are narrow. The unrest unexpectedly caused problems in controlling the situation. The riot lasted for about 5 hours. Everyone involved will be arrested.

We have been arresting rioters based on CCTV camera recordings and cell phone video recordings. It is learned that the Popular Front of India was behind the riots. We are also investigating in this regard.

According to police sources.

Kanpur Police Commissioner Vijay Singh Meena said, “Thirty-six people have been arrested so far under the Prevention of Thugs and Anti-Social Activities Act. Steps are being taken to demolish the illegal buildings of anti-social elements. Full details of the riots have been sent to the government.”