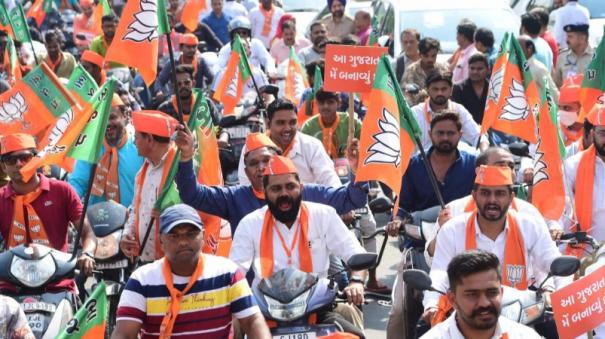 Ahmedabad: 12 BJP leaders contesting as an independent candidate in the Gujarat Assembly elections have been suspended from the party.

Gujarat Legislative Assembly elections will be held in two phases on December 1 and 5. Filing, review and withdrawal of petitions for the two-phase elections has been completed. 1 week left for the first phase of elections.

6 time MLA: In this case, the state BJP president CR Patil announced yesterday that 12 people who are contesting against the official candidates of the BJP in the second phase of the election to be held on December 5, will be temporarily removed from the party. Among them are 6-time MLA Madhu Srivatsav and 2 former MLAs.

November 21 is the last day to withdraw nominations for the second phase of elections. However, since they did not withdraw their nominations, disciplinary action was taken against them.

Dec. A few days ago, the party had suspended 7 BJP members who were contesting as independent candidates in the first phase of the elections to be held on the 1st. Currently, 12 more people have been suspended. All of them were denied the opportunity to contest the elections.