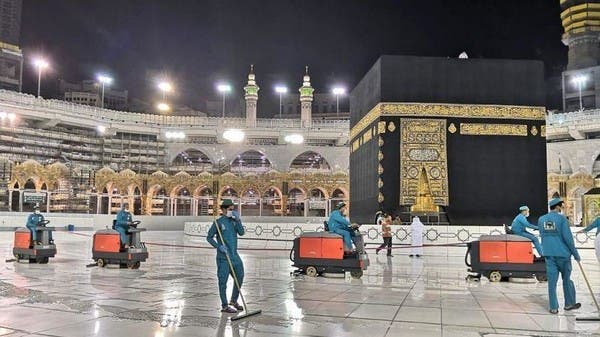 The General Presidency for the Affairs of the Grand Mosque and the Prophet’s Mosque is intensifying sterilization and disinfection work in the Grand Mosque. The Agency for Field Services and Affairs and Environmental Protection Investigation at the Presidency has allocated more than 12 teams working 24 hours a day to disinfect and sterilize the Grand Mosque, numbering 4,000 male and female workers.

She explained that one of these teams is the Architectural Elements Division, which specializes in purifying all the architectural elements of the Grand Mosque, including the endeavor, the second Saudi expansion, and what it includes of columns, domes, arches, decorations, inscriptions, the marble balustrade overlooking the courtyard, and all the architectural elements of the second Saudi expansion of marble columns, and bases. Shoulders, crowns, doors, windows, lighthouses, domes from the inside, ceilings and all their decorative elements, and copper parts, provided that they are purified and polished with the appropriate materials for that.

There is also a carpet washing work team that washes the carpets of the Sacred Mosque in the Kudai Laundry, dries it and sweeps it after drying and perfumes it with a special material for carpets, and then wraps it carefully according to a program prepared for that.

The Escalators and Elevators Division: This squad washes and cleans escalators and elevators using stainless steel materials, according to a program prepared for that.

As for the emergency squad, it performs any additional work that is requested, whether inside or outside the Holy Mosque.

And the role of the washing team for the plastic walkers inside and outside the campus and re-deploying them again after drying and following up after brushing them.

While the cleaning team for the facades of the Sacred Mosque cleans the green tiles at the entrances to the doors and washes it with water.. And the manhole team cleans the manholes inside the Grand Mosque and its courtyards after removing the tiles, and cleans and washes what is covered with cleaning and disinfectant materials.