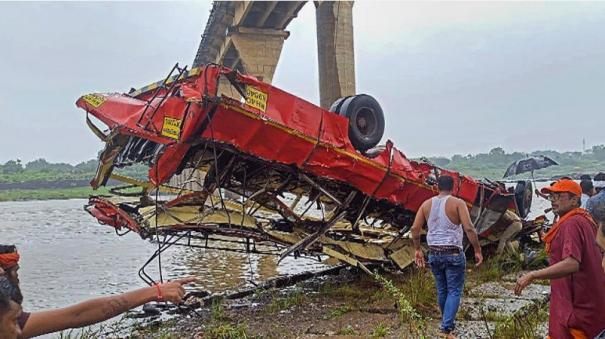 Thar/ Madhya Pradesh: Thirteen people were killed when a bus belonging to the Maharashtra Transport Corporation overturned into the Narmada River in Thar, Madhya Pradesh.

A bus belonging to Maharashtra State Transport Corporation MSRTC left at 7.30 am on Monday from Indore in Madhya Pradesh for Pune carrying around 40 passengers.

The bus was traveling on Calcutta bridge on the Agra-Mumbai highway in Thar district when it lost control and fell into the river after collapsing the barriers of the bridge. Madhya Pradesh State Home Minister Narottam Mishra said that 13 people were killed in the accident and 15 people were rescued.

Condoling the accident, Prime Minister Modi said on Twitter, “The bus accident in Thar, Madhya Pradesh is sad. My thoughts are with those who have lost their loved ones. Rescue operations are ongoing. Local authorities are providing all necessary assistance to the victims.”

A compensation of Rs 2 lakh each has been announced for those who died in the accident in Thar area. In this regard, the Prime Minister’s Office tweeted, “Prime Minister Narendra Modi has announced that the families of those who died in the bus accident in Thar area of ​​Madhya Pradesh will be given financial assistance of Rs. 2 lakh each from the Prime Minister’s National Relief Fund. He also said that the injured will be given Rs. 50,000 each.”

Similarly, Chief Minister Eknath Shinde has ordered the Maharashtra State Transport Department to provide a compensation of Rs 10 lakh each to the families of those who died in the accident, according to reports from the Chief Minister’s Office.