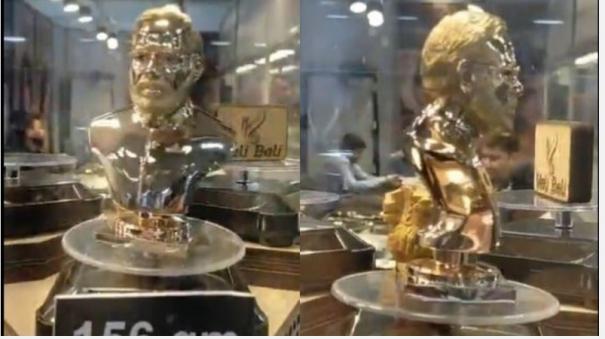 Mumbai: A gold and diamond jewelery exhibition was held in Maharashtra capital Mumbai from 5th to 9th. More than 1,300 companies participated in this. 2,500 halls were set up. More than 32,000 traders from 800 cities of India and 80 foreign countries visited the exhibition.

The exhibition featured a gold bust of Prime Minister Modi. Made of 156 grams of gold, the statue impressed the audience. The related video and photo are being shared on social media. No details about the company that placed the statue or the jeweler who designed the statue were disclosed in the exhibition.

A businessman from Indore, Madhya Pradesh, Sokta, has been selling silver idols of Prime Minister Modi for many years. Modi idols, made of 150 grams of silver and measuring 7 inches in height, are sold at Rs 11,000 each. Sogdha says with pride that PM Modi idols are selling like crazy. Similarly, Nirmal Verma from Indore is selling silver coins with Prime Minister Modi engraved on them.

Ever since Modi took office as the Prime Minister of the country, the clothes and glasses he wears have been attracting people’s attention. It is customary for him to wear the traditional clothes of his respective states when he participates in state functions. In the comments posted on social media, “Prime Minister Modi is more popular than movie stars. It is now certain that Prime Minister Narendra Modi is more popular than actors Amitabh Bachchan and Rajinikanth.”