16 medals for the UAE Special Olympics champions in Austria 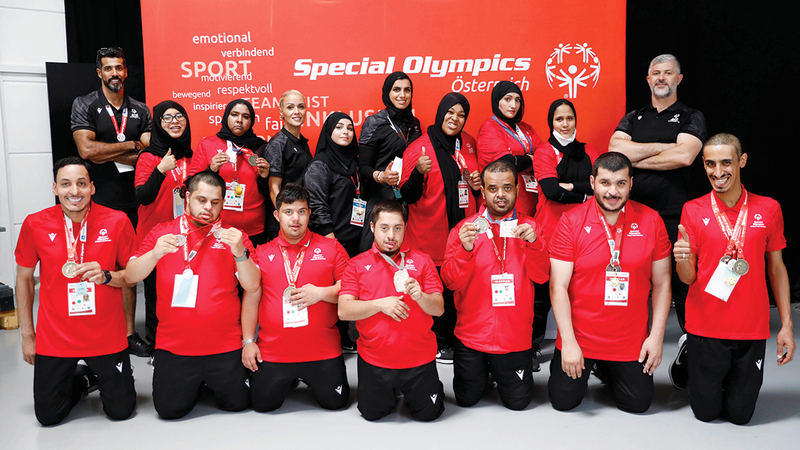 The UAE Special Olympics delegation succeeded in winning 16 different medals (8 gold, two silver, and 6 bronze) during its participation in the National Games “Austria 2022”, which was held in Burgenland, eastern Austria, from 23-28 June.

Sheikh Suhail bin Butti Al Maktoum, Executive Director of the Sports Development Sector at the General Sports Authority, said in a press statement: “We are proud of the achievements of the People of Determination, and their constant determination to reach the podiums, and raise the flag of the UAE in various continental and international forums in which they participate. It reflects the great work done by the Special Olympics Foundation and its partners from government agencies and sports sector institutions concerned with empowering people of determination and improving their sports performance.”

He added: “Participation in international tournaments represents a great opportunity to develop the level of players, through contact with players from different countries, in addition to enhancing the culture of participation in international forums, which contributes to developing their belief in their abilities and enhances their chances of achieving achievements. Therefore, the authority supports partnership efforts, It calls on the sports sector institutions to work on developing ways of cooperation locally and internationally, with the aim of enhancing the presence of UAE sport in various forums, and giving Emirati athletes the opportunity to compete in high-level championships.

He added: “The wonderful performance of our players in various international forums confirms their complete readiness and good preparation for international participation, and to represent the UAE in a very honorable manner. After Austria 2022, the unified Emirati women’s football team will go next month to participate in the 2022 World Cup in Detroit, USA.”

Teams from the Special Olympics institutions from Germany, Luxembourg, Slovenia, Slovakia and Hungary participated in the National Games of the Austrian Special Olympics 2022, in addition to Austria and the United Arab Emirates.

In addition to strength sports, sports dancing and table tennis, in which the Emirati delegation participated, the games included other games such as judo, swimming, tennis, bocce, golf, bowling and football.

“We were invited to participate in the tournament because of our strong relationship with the Austrian Special Olympics.”