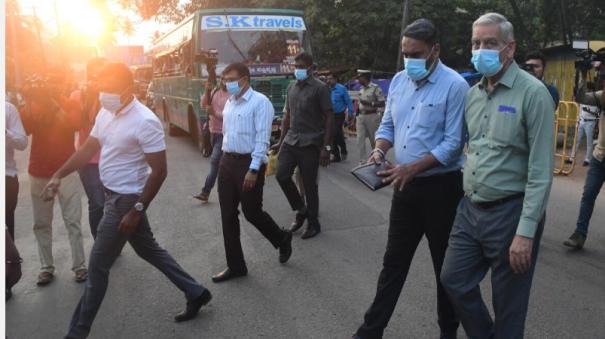 Bangalore: On November 4, the National Investigation Agency (NIA) registered a case against some members of the Popular Front of India (PFI) in Shimoga in the state of Karnataka for recruiting people for the terrorist organization IS.

In this regard, the NIA officials conducted an investigation in Bengaluru, Mysuru, Mangalore, Shimoga, Haveri and other places. Then it was discovered that 4 people including Syed Yasin and Mas Muneer from Shimoga had recruited people to the IS organization through social media.

Subsequently, the NIA officers arrested the 4 people in Shimoga. While interrogating the arrested Mas Muneer and Syed Yasin, it was revealed that they recruited youths under 30 years of age to join the IS by camping in Shimoga, Mangalore and Haveri.

Following this, NIA officials conducted surprise raids in Dakshina Kannada and Haveri yesterday morning. Masim Abdul Rahman from Dakshina Kannada and Nadeem Ahmed from Haveri were caught in it. These 2 people are said to be involved in recruiting people for the IS terrorist organization through social media.

Masim Abdul Rahman was in close contact with Syed Yasin who was arrested in Shimoga. It seems that he was planning to engage in terrorist activities in Mangalore as per his direction. Nadeem Ahmed from Haveri has been in touch with Mas Muneer. Sources of NIA officials said that they have visited Mumbai and Delhi 5 times in the last 6 months and met the supporters of the IS terrorist organization there.

7 years imprisonment: The National Intelligence Agency (NIA) received information that ISIS-backed militants from Kerala were planning to kill celebrities. According to this, Mohammad was arrested at the Delhi airport in 2020. The trial against him was going on in the NIA court in Kochi. He has been sentenced to 7 years imprisonment in this case.