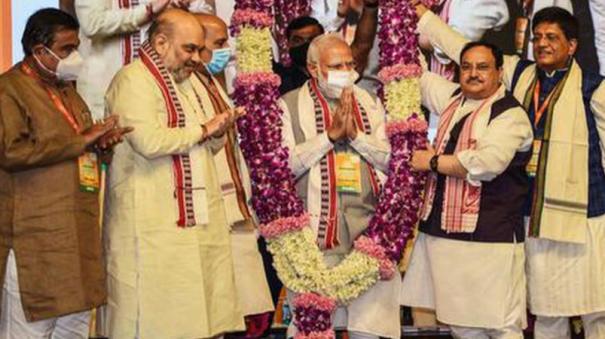 New Delhi: The BJP’s top executive meeting will be held on May 20 and 21 in Jaipur, Rajasthan. The meeting will discuss the strategy for the 2024 Lok Sabha elections and the success of the Assembly elections, as well as changes to be made in the party structure. It is expected that Prime Minister Modi will attend the meeting via video and talk to party executives.

The Lok Sabha elections will be held in 2024. The BJP is working towards the goal of seizing power for the third consecutive term and appointing Modi as Prime Minister, even though it is still 2 years away.

Similarly, the Congress, which has consistently lost the recent assembly elections, is working hard to win the next Lok Sabha elections. Party leader Sonia Gandhi has set up a high-level committee to look into the suggestions made by Prashant Kishore.

Prior to that, assembly elections will be held in Gujarat, Chhattisgarh, Madhya Pradesh and Rajasthan. The BJP, the Congress and the Aam Aadmi Party are actively campaigning.

In this context, the BJP’s high-level meeting will be held on May 20 and 21 in Jaipur, Rajasthan. The meeting is said to discuss in detail the strengthening of party structures ahead of the BJP’s 2024 elections.

The meeting, chaired by BJP national leader JP Natta, will be attended by party state leaders, state officials, co-chairs and general secretaries from across the country.

The changes to be made in the party structures and the steps to be taken in the executive bodies in line with the elections are discussed. The BJP also said that there would be a detailed discussion on the efforts made to strengthen its structure since its inception.

Prime Minister Modi attends this high-level meeting via video and speaks to party executives. It is expected that he will then make recommendations on changes to be made in the party structures.