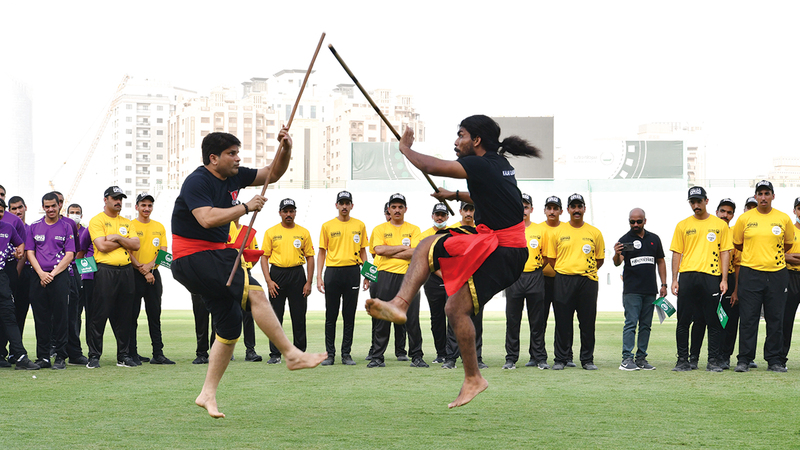 The Olympic Day activities, which were held at the Dubai Police Officers Club, witnessed the establishment of a range of sports, heritage and entertainment activities, with the participation of the “Positive Spirit” initiative of the Dubai Police, whose objectives are in line with the foundations and objectives of the Olympic movement to promote the principles of friendship, excellence, respect and consolidate the values ​​of tolerance and coexistence. The Dubai Police band and cavalry participated in the Olympic Day, with sports shows for fencing, badminton, karate, volleyball, bicycles, cricket, and organizing a running marathon. A group of people of determination also participated in the event.

The event was attended by the Assistant Secretary-General for Administrative and Financial Affairs of the National Olympic Committee, Eng. Azza bint Suleiman, and a number of heads and representatives of sports federations.

For his part, Lieutenant-General Abdullah Al Marri, Commander-in-Chief of Dubai Police, expressed their pride and happiness in hosting the Olympic Day activities at the Dubai Police Officers Club, praising the efforts of the National Olympic Committee headed by His Highness Sheikh Ahmed bin Mohammed bin Rashid Al Maktoum, and their keenness to promote and support the government’s directions in the field The athlete in the form of initiatives and events full of participants and sports lovers of all groups, ages and cultures in society. Abdullah Al-Marri affirmed the Dubai Police’s continuous support for national sports teams, believing in the importance of this field in consolidating a culture of tolerance, coexistence and dialogue among members of society of different cultures, noting their full support for sports activities and events, and their keenness to perpetuate and spread the culture of sports, by encouraging and motivating athletes in Dubai Police to participate Developing capabilities and representing the institution, the emirate and the state in front of the largest and most skilled international teams, in an effort to raise the UAE flag in international forums, and to achieve leadership in all fields. For her part, the Assistant Secretary-General for Administrative and Financial Affairs of the National Olympic Committee, Eng. Azza bint Suleiman, stressed the importance of interacting with all programs, initiatives and activities that enhance the role of the Olympic movement and highlight the noble values ​​of sport, thus contributing to spreading the spirit of cooperation and brotherhood among all members of society as well as spreading culture. Sports, based on the committee’s role as an active member of the International Olympic Committee and its responsibility to consolidate and highlight the value of the national Olympic movement in the United Arab Emirates.

In press statements, she indicated the keenness of the National Olympic Committee, headed by His Highness Sheikh Ahmed bin Mohammed bin Rashid Al Maktoum, to celebrate this important day in the Olympic movement, as it is an event during which efforts are united, goals and objectives are shared, and all Olympic committees around the world compete in order to confirm principles. The Olympic High which is represented in friendship, distinction and respect.

Bint Sulaiman praised the prominent role played by the Dubai Police General Command in the event through its fruitful partnership and hosting the Olympic Day activities at the headquarters of the Dubai Police Officers Club and providing all the means of success and excellence that resulted in its exit in this bright image, with the organization of many sports activities on the sidelines of the event. At the same time, I extended my sincere thanks and appreciation to all the teams of “Dip Dive Dubai” for their initiative and their welcome to promote the Olympic Day before its launch, which contributed to the invitation to reach the largest possible segment of society.

“Dubai Police continue to support the national teams, and are keen to perpetuate and spread the culture of sports.”

“An event in which goals and objectives are shared, and all committees race to affirm the lofty Olympic principles.”