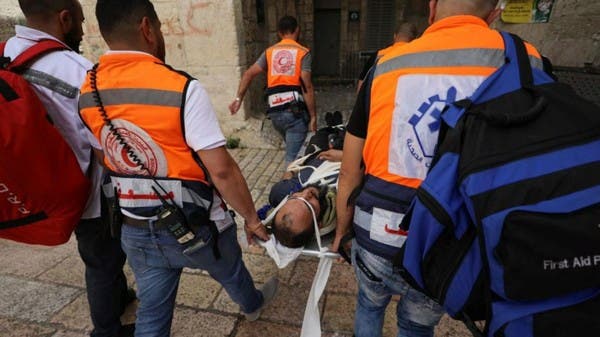 On Friday, the Israeli security forces responded to a Palestinian demonstration south of Nablus, during which dozens of people were wounded.

Twenty-two civilians were wounded, during the suppression of the security forces, a protest march condemning the settlement on the summit of Mount Sabih in the town of Beita, south of Nablus.

The Palestinian News Agency, citing medical sources, reported that the security forces fired live bullets and rubber-coated metal, stun grenades, and tear gas heavily at the marchers, wounding two civilians with live bullets, three with rubber-coated metal, 15 by suffocation, and 2 Wounded as a result of their fall after the occupation soldiers pursued them

Dozens of citizens performed prayers on the top of the mountain, and organized a march condemning the establishment of a settlement area there.

It is worth noting that Israeli settlers tried to establish a settlement area on the top of the mountain several times, and as a result of the demonstrations of the people in the villages of Beita, Qabalan, and Yatma, they were removed.

However, the recent period witnessed the establishment of more than 20 “caravans”, in preparation for the capture of the mountain summit completely.

In a related context, the Palestinian Foreign Ministry condemned, on Friday, Israel’s approval to build 560 settlement units southeast of Bethlehem.

And she considered in a statement that the credibility of the US administration, its president, Joe Biden, and its Secretary of State, Anthony Blinken, is at stake, because Israel continues to embarrass them by escalating its settlement and aggression against the Palestinian people, as she said.

She also expressed her desire for the Biden administration to succeed in front of Israeli tests by establishing its credibility, word of mouth, and implementing its positions and policies, adding that this will depend on the American behavior towards Israeli intransigence and on the ground.

In addition, the Ministry held the Government of Israel, headed by Benjamin Netanyahu, fully and directly responsible for the operations of settlement expansion and the seizure of Palestinian lands, warning of its disastrous consequences on the chances of achieving peace based on the principle of the two-state solution.

Good news for Visakhapatnam.. A giant IT company for the city, the moment is fixed!