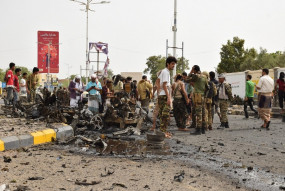 Digital Desk, Aden. The death toll in clashes between security forces in Yemen’s Shabwa has risen to 28, while 68 people have been injured. This information was given by a medical official to the news agency Xinhua.

A local medical source said on Thursday, on condition of anonymity, that data from local medical centers confirmed that a total of 28 people were killed in the Shabwa clashes, while more than 68 others were injured.

All the injured from both the sides are being treated in government and private hospitals in Shabwa, he said.

On Monday, clashes broke out between the Rival Security Unit in residential areas in Yemen’s southern province of Shabwa, Xinhua news agency reported.

On Wednesday, the governor of Shabwa ordered troops of the Southern Giants Brigade to launch a military operation to crack down on rebel troops and secure local state facilities in the province.

Yemen’s presidential leadership council expressed its full support for the governor of Shabwa and urged pro-government forces to enforce security and stability in the strategic province.