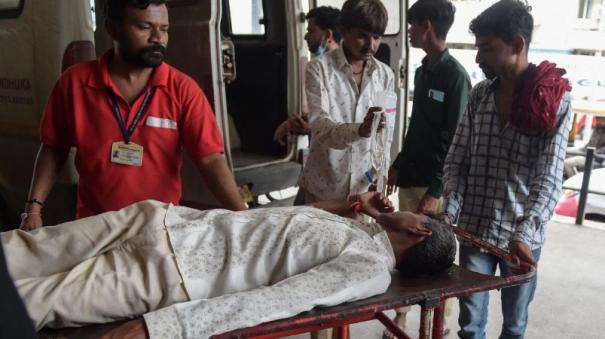 Ahmedabad: 28 people died miserably after drinking poisonous liquor in Gujarat where total prohibition is in effect. Another 30 people are undergoing treatment in life-threatening condition.

Gujarat is one of the states in the country which has complete prohibition of alcohol. Consumption and sale of alcohol is prohibited in this state. However, there are frequent complaints of counterfeit liquor being sold in defiance of the ban. Even though the authorities have taken steps to prevent this, they have not been able to stop the sale of bootleg liquor completely.

In this case, the people of Rojid and surrounding villages bought and drank the country liquor sold there last Sunday night in the village of Rojid, Parwala Taluka, Bodad District, Gujarat. Many of them fell ill early the next morning.

After that all of them were admitted to government hospitals in Parwala, Podad and surrounding places. In this case, 28 people have tragically died without treatment. Another 30 people are in critical condition. It is feared that the death toll may increase.

The deceased hailed from Bodad and Ahmedabad districts. Most of them are poor labourers. The death of 28 people due to poisoned liquor has caused great shock and sadness in the area.

The state government has ordered an inquiry into the incident. Accordingly, a Special Investigation Team (SIT) headed by an officer of Disp status has been constituted. A case of murder was registered and the team investigated. So far they have arrested many people in connection with the production and sale of fake liquor.

Gujarat State Police Director Ashish Bhatia says, “A case of murder has been registered under Sections 302, 328, 120B of the Liquor Prohibition Act in connection with this incident. 3 FIRs have been registered at Barwala, Ranpur and Ahmedabad suburban police stations. 14 people have been arrested,” he said.

Meanwhile, Gujarat Police sources said yesterday, “In the first phase of the investigation, it has been revealed that the chemical methyl has been mixed with liquor and sold in that village.

People who drank this have become ill. The methyl chemical is sold by a company called Emos. The company’s warehouse manager Jayesh alias Raju has sold 200 liters of methyl chemical to one of his relatives for Rs.60 thousand.

Meanwhile, Delhi Chief Minister Arvind Kejriwal, who is on a trip to Gujarat, met and consoled those undergoing treatment at the hospital.