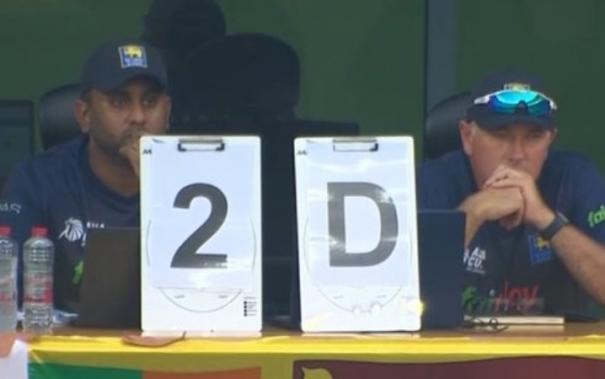 Dubai: During the ongoing Asia Cup series, the Sri Lankan cricket team was fielding against Bangladesh and the players were sent lines containing the secret code ‘2D, D5’ from the dressing room. Images containing the code have now gone viral.

In the first round of the current Asia Cup, the teams of Sri Lanka and Bangladesh, who have been placed in the ‘B’ group, had a series of tests yesterday. It was a life or death match for both the teams. The winning team will advance to the next round. Sri Lanka won the match by 2 wickets in Dubai. The reason for the fall was that the bowlers of the Bangladesh team gave extra runs in the final overs.

When the Sri Lankan team fielded in this match, the team’s coach Chris Silverwood kept some secret codes like ‘2D, D5’ visible to the players from the dressing room. That action has raised many eyebrows.

‘Then why is the captain on the field?’, ‘Is this cricket? Football?’ Even the netizens were raising some questions. In this case, it has been revealed that Silverwood has done the same before. He has also sent secret codes from the dressing room during his tenure as England coach in 2020. It was a T20 series against South Africa. The then captain of the England team, Morgan, said that there was nothing wrong with this.

“It’s not all rocket science. Other teams are doing the same. It is only an advice given to the captain as to how he can act according to the situation in the field. “There is no telling how to captain,” said Silverwood.

Sri Lankan coach passing the information to the players on the ground, did the same when he was the England coach. pic.twitter.com/QeJOuFGxGz