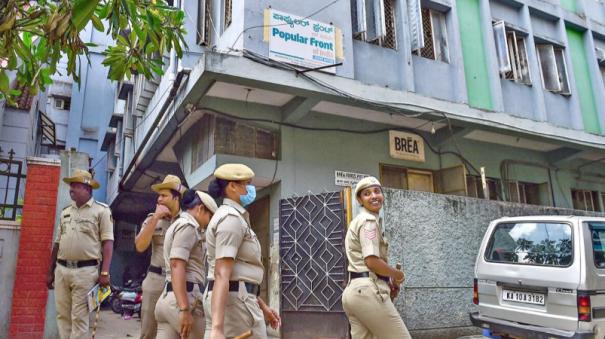 The test is being conducted in states like Madhya Pradesh, Karnataka, Assam, Delhi, Maharashtra, Telangana and Uttar Pradesh.

Officials said today’s raid is being conducted with the help of the local police based on the evidence obtained during last week’s raid and the information received from the arrested persons.

In Karnataka, raids were conducted at the houses of PFI executives in 6 districts of Samarajanagar, Bagalkot, Bidar, Vijayapura, Chitradurga and Mangalore. 7 BFI officials were arrested in Bagalkot district and Karim in Bidar district. District BFI president Ashfaq Jamahandi was arrested for inciting tension against raids in Vijayapura district, police said.

Bangalore ATGP Alok Kumar said that more than 75 BFI and STBI leaders and executives have been arrested as a precautionary measure across Karnataka.

4 people from Nagerbera area of ​​Assam state associated with BFI and 8 people including the head of the organization in Darrang district were arrested this morning.

Similarly, actions have been taken against BFI executives in Delhi and Madhya Pradesh. In Uttar Pradesh, the State Anti-Terrorism Squad has arrested 5 people associated with the BFI in Kalisan village of Modinagar.

Earlier, on the 22nd, a mega raid was conducted against the PFI organization across the country on the direction of the central government in connection with allegations of association with terrorist groups, raising funds for them and organizing recruitment meetings. The tests were conducted at 93 locations in 15 states namely Kerala, Tamil Nadu, Karnataka, Andhra Pradesh, Telangana, Uttar Pradesh, Rajasthan, Delhi, Assam, Madhya Pradesh, Maharashtra, Goa, West Bengal, Bihar and Manipur. More than 100 BFI and STBI executives were arrested.

Gonzalo Núñez: Why were you fired from América TV and what did the loss of $50,000 have to do with it?