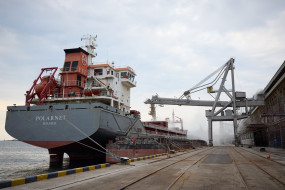 Kubrakov said the first convoy carrying Ukrainian grain has left the ports of Greater Odessa. According to the news agency DPA report, the ships are reported to have 57,000 tonnes of maize.

According to Ukrainian officials, the ships will first sail to Istanbul for inspection and then to Britain and Ireland. Rajoni, the first grain carrier to leave a Ukrainian port after a month-long blockade, also left Odessa on Monday carrying corn.

It was inspected at the Bosporus in Istanbul, before moving on to the Lebanese port of Tripoli, after an inspection action through a corridor agreed by the warring sides.

The shipments are seen as necessary to stabilize grain prices in global markets amid fears of famine in the Middle East and Africa. For security reasons Kyiv currently has a limited number of sailors to three per day.