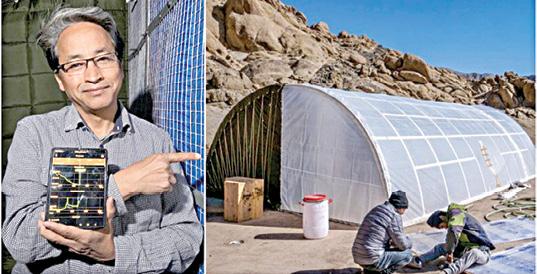 A solar-powered tent to help soldiers camp in the cold region of Ladakh. Sonam Wangchung Has created.

Bollywood movie 3 Idiots Sonam Wangchung is known as the source of the story. He designed a tent to help soldiers camped in a cold region like Ladakh. It weighs 30 kg and is easy to carry. The tent can accommodate up to 10 soldiers at a time.

This tent is best suited for use in areas with freezing temperatures ranging from 0 to minus 14 degrees.

To withstand the cold, soldiers set fire to trees and stay in the area with the heat available. But this tent has put an end to it.

The emission of carbon dioxide from burning wood has been prevented and the impact on the environment has been reduced.

Sonam Wangchung’s initiative has been highly praised by Mahindra Chairman Anand Mahindra. “I bow to your efforts to help the soldiers guarding the border,” he said.

Sonam Wangchung, born 1966, holds an engineering degree. He is widely known for his innovative activities and for bringing about changes in education. He founded the Ladakh Students’ Education and Cultural Movement (Semgol) in 1988 in the Ladakh region and has been involved in many activities. He has created a solar-powered complex called Semgol. In 1994, he formed the Village Community Organization in collaboration with the government and brought about changes in the functioning of the government school.

Karnu was taken away by the Kauravas with money .. Vijayasaireddy shocking comments

Expatriates will continue to be barred from entering Kuwait; Directorate of Civil Aviation with the announcement

Kovid Vaccination Campaign in Qatar; Everything you need to know