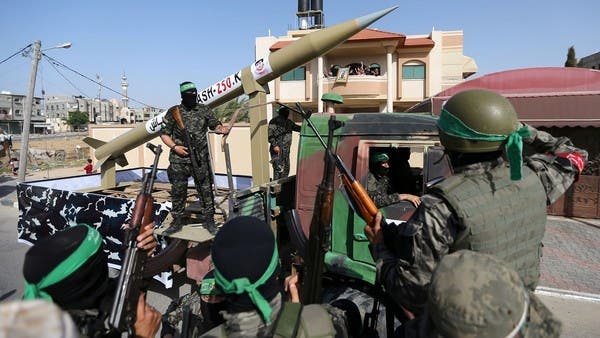 British Home Secretary Priti Patel announced on Friday that she had taken a decision to ban Hamas completely.

The minister stressed that “Hamas has terrorist capabilities, including access to advanced weapons on a large scale,” adding that the government is committed to confronting extremism and terrorism wherever it is.

In 2001, Britain had blacklisted the Izz al-Din al-Qassam factions – the military wing of Hamas – without the movement’s entirety, and it is now reverting to considering the entire movement a terrorist organization.

And the British Guardian newspaper reported, earlier, that Hamas supporters would face up to 14 years in prison under the decision announced by Patel.

According to information collected by Al-Arabiya.net, Hamas has financial and investment activities in Britain, some of which are in partnership with the Muslim Brotherhood, and others are managed by the movement alone through affiliated leaders residing there.

According to the information, it was found that Hamas aimed to collect the largest possible donations and withdraw funds from the Gulf, the United States of America and Britain through the establishment of financial and media arms and economic entities. London is under the leadership of the Palestinian Hafez Ajaj Al-Karmi, who is responsible for contacts between Western countries and the Brotherhood in Egypt, Gaza and the Arab countries, and prepares the budget and transfers funds to the administrative offices.

With him is the “Planning and Research Department” and also works in London under the leadership of Muhammad Kazem Sawalha, a leader in Hamas, who participated in political activities, propaganda and financial coordination related to the activities of the movement, and served as a member of the political bureau and director of the legal office in the movement, and also supervised the allocation and supply of large sums of funds for Hamas activists in Palestine.

The information collected by Al-Arabiya.net revealed that the movement’s “security department” operates from London under the leadership of Maher Jawad Saleh, and is responsible for tracking opponents of Hamas and collecting information on investment systems, and is active in the field of financial transfers and simple economic companies, as it was found that all Economic activities, part of which was earmarked for financing terrorist operations.

In the context and following the British decision, the funds and activities in which Hamas contributes to Britain will be subject to freezing, including the Brotherhood’s “Al-Hiwar” channel, which broadcasts from the capital London and is run by the Palestinian Brotherhood member Azzam al-Tamimi, and Hamas contributes a percentage of the shares to it, as it is expected that the British authorities will subject it to observation. the wish.

It is noteworthy that Hamas contributes and owns a fund under the name “Palestine Relief”, based in London and called “Interpal”, in which it collects funds from donors to support the Palestinian cause, and directs a large part of these funds to finance armed operations, whether for the movement or the Brotherhood, and these operations are undertaken by the Palestinian Alhamsawi Essam Youssef Salah Mustafa.

The movement also has economic entities in Europe to raise funds and donations, including what is known as the “Holy Land Foundation”, and it has branches in Europe and collects millions of dollars in it.

Hamas owned a fund in France called the Charitable Committee in Support of Palestine, as well as what is known as the “Al-Aqsa Fund” with branches in the Netherlands, Belgium and Denmark, the “Sanabel Al-Aqsa” Foundation in Sweden, the “Al-Isra” Foundation in the Netherlands, and two funds in Switzerland called “AS” BP, SHS, and a fund in Italy called “ABSBB,” and two funds in Austria. .

Although the governments of some European countries banned and frozen some of these funds after observing and monitoring their funds to finance Hamas activities and not to support and advocate the Palestinian cause, the movement re-established them anew with new names and new personalities to collect more funds from Muslims and Arabs in European countries, and invest them for the benefit of The Brotherhood on the one hand and the financing of its armed operations on the other.