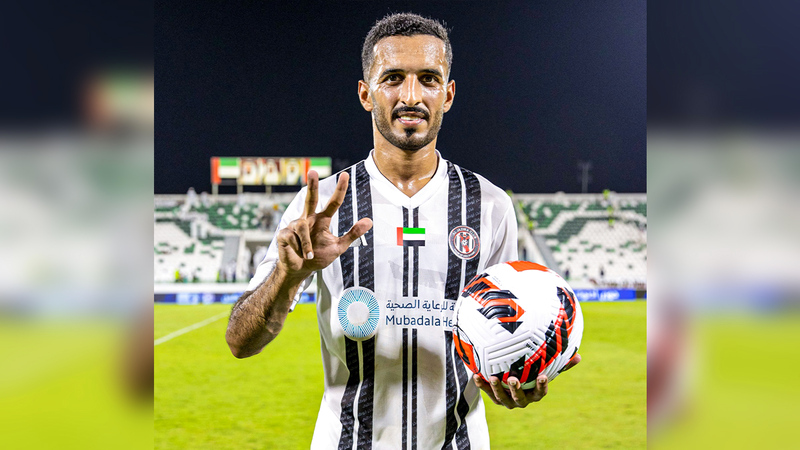 Al-Jazira international striker, Ali Mabkhout, hit three personal numbers for him on the night of scoring three goals (hat-trick) in his team’s match against Khor Fakkan, which took place the day before yesterday, and ended in favor of “Abu Dhabi Pride” 4-2.

Mabkhout managed to increase his league goals tally to 186, widening the difference with the 175 number kept by Al Wasl club legend, Fahd Khamis.

Mabkhout’s hat-trick raised the number of his goals he scored away from home to 92, nearly 50% of his league goals. Ali Mabkhout became the first player to score 15 (hat-tricks) at the level of the league in general and professionals in particular.

The Al-Jazira striker also scored his best start since he appeared with his team by scoring five goals in the first two rounds of the competition, to be among the top scorers in the competition, which he had previously won twice.

Ali Mabkhout wrote his birth certificate at Hamdan Bin Zayed Stadium in 2009, when he recorded his first mark, and wrote his name in the records of the players who put a mark in the net for the first time.

For his part, Al Jazira captain and goalkeeper, Ali Khaseef, stressed that Ali Mabkhout’s brilliance this season in terms of scoring is a positive thing for the national team, and for the UAE league in general, not just Al Jazira. Khaseef said in a press statement: “We are happy with this appearance of striker Ali Mabkhout, his strong return represents an addition to the Emirati football in general, and I hope that the injury will stay away from him.” Al-Jazira goalkeeper demanded not to rush to pass any judgments on the teams, whether at the top or bottom, saying: “We are still in the second round, and the competition is at the beginning, and judging the teams will not be logical before the seventh or eighth round at least.”