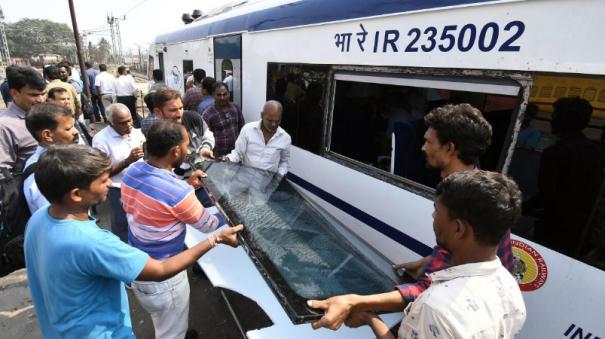 Visakhapatnam: Prime Minister Modi will inaugurate the Vande Bharat train service between Secunderabad and Visakhapatnam tomorrow at 10 am through a video presentation from Delhi.

The Vandebharat railway line connects the two Telugu states. This is the 8th Vande Bharat train in the country. This train reached Visakhapatnam on a trial run from Chennai last Wednesday.

At that time, when they came to a place called Kanjarapalayam near Visakhapatnam, three people, Shankar (22), Sandhu (21) and Rajkumar (19) from Madinabagh area came under the influence of alcohol and set stones on the Bharat train. Due to this, the mirrors of the train were damaged. The incident was recorded on the train’s surveillance camera.

Appear in Court: Immediately based on the complaint made by the railway pilot, the railway police arrested the three and produced them in the railway court. They were fined and sentenced to one week in jail.