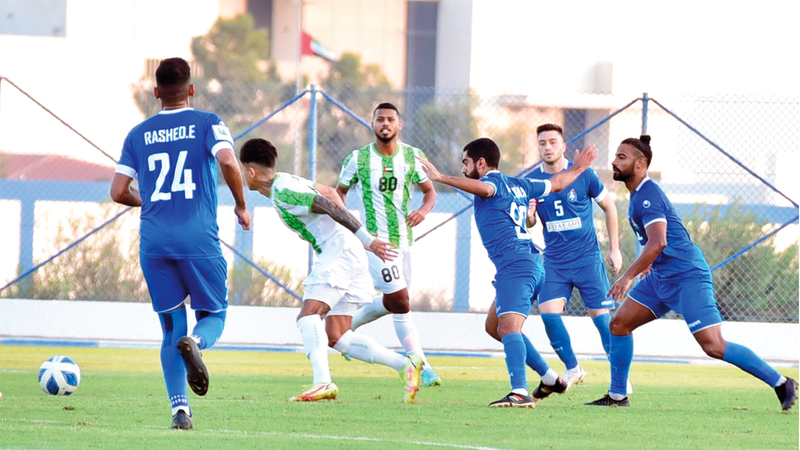 Al-Bataeh, Dibba Al-Fujairah and Hatta clubs reduced the points difference with Al-Arabi “leading”, after they managed to win, at a time when Al-Arabi tied with Dibba Al-Hisn without goals, in the most prominent scenes of the seventh round of the first division, which was held on Friday and Saturday last.

The matches of the round resulted in the victory of Al-Bataeh over Al-Jazira Al-Hamra (3-1), Hatta over the City team (5-1), Dibba Al-Fujairah over Al-Dhaid (3-0), Al-Taawun over Masafi (3-1), and Al-Rams over “Gulf FC” » With a clean four, Al Arabi tied with Dibba Al-Hisn without goals.

One of the most prominent scenes of the tour was the strong return of the Hatta team to the competition for the promotion of the professionals, after it achieved the third victory in a row under the supervision of its new Algerian coach, Fouad Boumadhal, and the victory over City (5-1) contributed to the heat of the competition at the top of the ranking.

Hatta Algerian coach Fouad Boumdel told “Emirates Today”: “We are happy to achieve the three victories, which reflect playing in the spirit of one team, and we look forward to continuing with the same focus and giving, so that the team returns to its natural position, thanks to the support of the club’s management, and the goal is to restore the club’s family’s confidence in the team.”

Highlights of the seventh round

• Al-Rams recorded his biggest victories throughout his participation in the “amateur” by beating “Gulf FC” by four.

• Dibba Al-Fujairah is considered the best defense, as it conceded only 3 goals, and its attack is the best with 17 goals.