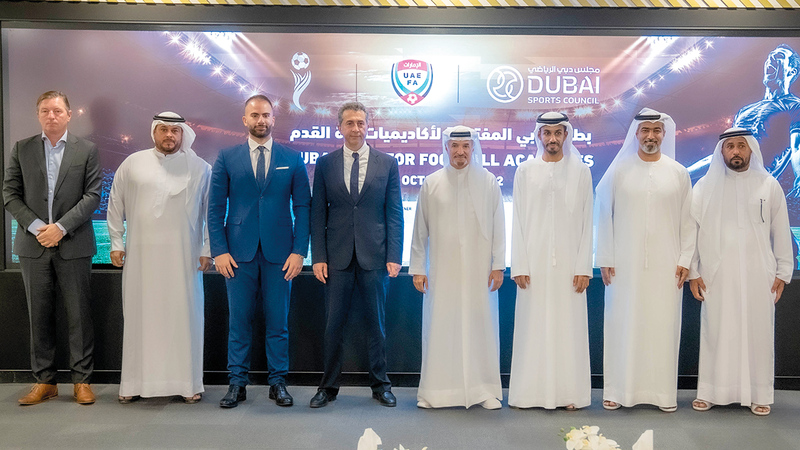 The Dubai Sports Council and the Football Association announced the organization of the “Dubai Open Championship for Football Academies”, in cooperation with Delta Sports Events, the operating partner of the event, and (Inspratos), the host of the tournament matches, which will be held from the ninth of October to the 30th of next March at the stadiums of Dubai Sports City.

This came during a press conference held at the headquarters of the Dubai Council, in the presence of the Secretary-General of the Council, Saeed Hareb, the Secretary-General of the Football Association, Mohammed bin Hazam Al Dhaheri, the Acting Director of the Sports Development Department at the Dubai Sports Council, Ahmed Salem Al-Mahri, and the Director of the Sports Events Department of the Council, Ali Omar. Ahmed Al-Qaqabibi, Chairman of Delta Corporation, Hussein Murad, CEO of Inspiratus Sports District, and officials of government and private academies.

Saeed Hareb said that the Dubai Council is proud of this tournament, which it launched in 2017 under the name “Dubai Sports Council Championship for Football Academies”, and it achieved great success over five years within the official directions to attract and develop sports talents. He added: “More than 3,000 male and female players from 150 teams representing 42 academies will participate in the tournament, competing in 1,200 matches, attracting more than 20,000 spectators from families of players, scouts and those interested in the academies sector. This number of matches will contribute to discovering and developing many talented players in different age groups.”

For his part, Bin Hazam said: “The tournament serves the strategic objectives of the Federation, and we thank the Dubai Sports Council for their constant cooperation with us in launching initiatives, programs and organizing tournaments that contribute to the development of the football sector.” He added, “This tournament is a golden opportunity to choose talents, which contributes to the development of teams and teams alike.”

For his part, Ahmed Al-Qaqabibi said, “We are pleased with the great turnout by the academies to participate in the tournament, which contributes to providing the opportunity for players of eight age groups, which are under: 7-8-9-10-12-14-16-18 for boys and girls. Which will contribute to the rapid discovery of talents from an early age.” He added, “The tournament matches will be managed by 40 referees, and in the end, the best teams, players and goalkeepers will be honored, and more than 50 professionals will work on organizing the tournament.”

The tournament’s 1,200 matches are expected to attract more than 20,000 spectators between 9 October and 30 March.