31 Medals of the Emirates Harvest in the «World Games» 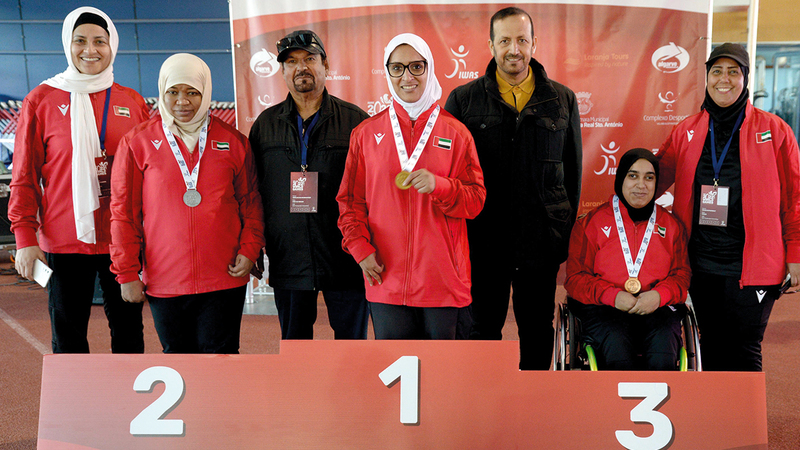 The national team began its participation in the Portugal World Games (IWAS) for Wheelchairs and Amputees in the most wonderful way, and from the first day, by winning 31 medals, including 11 gold, 13 silver, and seven bronze, since the start of the competitions, and Abdullah Al Ghafri started the championship with the first silver medal for swimming in the competition 100-meter freestyle in the (S9) category, achieving a time of 1 minute, 25 seconds, and 53 parts of a second.

The powerlifting champions won six gold medals, a silver medal, and a bronze medal, the most prominent of which was Aisha Al-Mutaiwee winning the gold in the women’s under-86 kg category in the junior category, and the silver in the “Elite” category. The champion, Muhammad Khamis Khalaf, won the men’s 97 kg gold, Haifa Al Naqbi’s gold in the under 76 kg category, and Abdullah Al Naqbi won the gold in the under 107 kg competitions, in which Khaled Al Hammadi won the bronze, and Saif Al Zaabi won the gold under 72 kg, and finally Adel Shanbih won the gold. Weight under 88 kg. At the athletics level, all the players excelled, winning five gold, 11 silver and six bronze medals.

While the players had a share of winning gold in athletics, when Maryam Al-Zeyoudi won the gold in the F40/41 category, and Sarah Al-Junaibi won the javelin throw, achieving a new world record with a distance of nine meters and 68 cm. Mohammed Al-Shehhi won two silver medals in the under-21 sprint competitions, 100m for the T54 category and 800m for the T34/54 categories. Badr Al Hosani won the silver medal in the 100m race, T54 category, and Yahya Al Balushi won the silver medal in the 100m race, for the T46/64 categories.

In the scepter throw, Mohammed Al Balushi won the F32/51 class silver, and Noura Al Ketbi won the F32/51 class silver. Finally, Maryam Al Matrooshi won the silver medal for the F44/46/64 categories. The climb to the podium was for the athletics champions to win bronze for Mohammed Al-Kaabi in the F35/36 shot put, Ahmed Al-Mazmi, Sheikha Al-Mazmi and Rashid Al-Zeyoudi in the javelin throw, and Dhikra Al-Kaabi in the scepter throw, then Mohammed Al-Mazroui in the 100m race F33 category.

Dr. Abdul Razzaq Bani Rashid, head of the national team’s mission, said in a press statement: The players’ superiority was not a coincidence, but was the result of focus, effort and determination that he witnessed himself during and before the tournament. The tournament witnessed Dr. Tariq Sultan bin Khadim, Vice-Chairman of the UAE Paralympic Committee and Vice-President of IWAS, crowning the three UAE National Javelin Throwers, Sarah Al-Junaibi, Aisha Al-Khalidi and Sheikha Al-Mazmi.

The UAE champions in powerlifting and athletics shone brightly in the Portugal Wheelchair Tournament.