3,700 hectares of land burnt due to forest fire 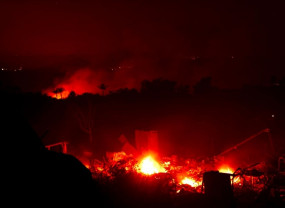 Digital Desk, Paris. Since Monday, more than 3,700 hectares of land have been burnt in a fire in the south-western department of Gironde in France. This information was given by the Prefecture of Jirond in a statement.

The prefecture said on Wednesday that the gendarmes evacuated 1,000 more people on Wednesday, bringing the total number of evacuees from Monday to 1,840.

More than 1,000 firefighters from Girond and other departments are being mobilized, the prefecture said. Six Canadian, three Dash and two water bomber helicopters have been deployed in the area.

The prefecture said that emergency accommodation is being offered for evacuees in Le Porge and other municipalities, Xinhua news agency reported.

The prefecture noted that, the forest fires have been controlled but are on the rise again due to strong winds.

It has asked those living near forest fire areas to wear FFP2 or FFP3 masks to avoid smoke.

Local media reported that more than 30,000 hectares of land in Jirond was burnt due to dry weather and heatwave this summer.