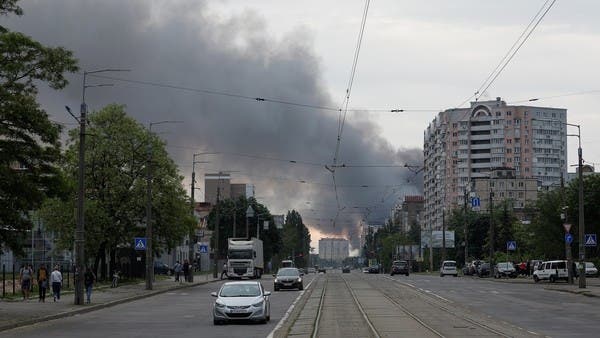 Today, Sunday, the Russian army continues to strike the positions of Ukrainian forces and military infrastructure, as part of its military operation aimed at liberating the Donbass lands, while Kyiv continues to receive material support and military equipment from Western powers.

In the latest field developments, the mayor of the Ukrainian capital, Kyiv, reported that 4 explosions occurred in the capital, this morning, adding that ambulance crews headed to the Shenkevisky area in the vicinity of Kyiv.

Four explosions were heard in the early hours of the morning in the Ukrainian capital, hitting an apartment complex near the city center, sparking a fire and emitting a large cloud of gray smoke.

No information was immediately available on possible victims. It is noteworthy that the capital, Kyiv, has not witnessed bombing for nearly two months.

Prior to that, it was reported by Russian media that the Russian president went to the Kremlin building at night to hold a meeting described as “important.”

The President of the Russian Republic of Chechnya, Ramzan Kadyrov, had announced the liberation of 800 civilians who were being used by the Ukrainian armed formations at the “Azot” plant in Severodonesk and Belogansk as human shields.

Before that, the Russian Ministry of Defense announced that the forces of the Lugansk Republic had completely liberated the cities of Severodonetsk and Borovskoe from Ukrainian armed formations, with the support of the Russian army.

The ministry said in a statement that the lands of the industrial zone of the “Azot” plant in Severodonetsk became under the control of the Lugansk forces, after the Russian army confronted the attempt of Ukrainian armed formations to turn these lands into a hotbed of depletion.

The ministry indicated that the towns of Voronovo and Sirotino were liberated, which means that the Luhansk forces have imposed control over the entire areas adjacent to the “Seversky Donets” river bank from the Lugansk region.

Ukrainian President Volodymyr Zelensky announced that his country would recover all the cities that Moscow managed to control, including Severodonetsk.

In a video address late on Saturday, Zelensky said that Ukraine had been subjected to 45 Russian missile launches in the past 24 hours, describing it as an attempt to break the morale of his people, according to Reuters.