4 Karnataka students drowned while taking a selfie in the waterfall 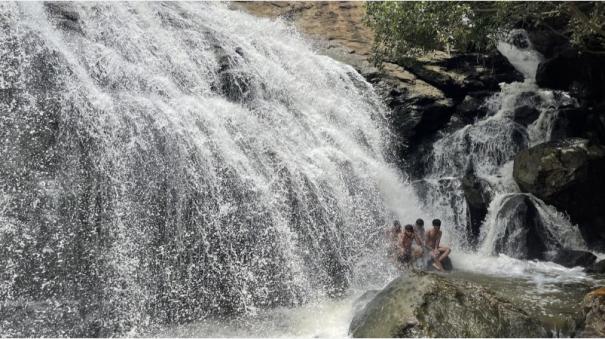 Belagavi: 4 Karnataka schoolgirls drowned while taking a selfie in a waterfall. 40 girls from the Arabic training center in Belagavi, Karnataka went on a trip to Kitwat waterfall near the Karnataka-Maharashtra border yesterday.

18 km from Belagavi city. This remote waterfall is located in Sangat taluka of Kolkapur district. Some of the students’ parents also accompanied them. All the students were bathing and playing in the waterfall water. Among them 5 students went ahead and went near the water fall and were taking selfies. Then, they tripped and fell into the stagnant water in a 15 feet ditch.

Hearing their screams, some local youths jumped into the water and tried to rescue the girls. By then, 4 students had drowned. One was staggering.

Later all the 5 girls were rescued and taken to Belagavi Medical Science Centre. Doctors said that 4 of them had already died. An unconscious student was admitted to a private hospital. Doctors have said that he is out of danger.

Belagavi Deputy Commissioner of Police (Law and Order) Ravindra Gadadi said, “Kitwat falls under the jurisdiction of the Maharashtra Police. With their permission, the deceased students, Asia Mujawar (17), Kutrashiya Hasam Patel (20), Rukasha Bisthi (20), Tasmiya ( 20) said that the bodies of 4 persons will be subjected to post-mortem examination. All of them belong to Belagavi city. A case has been registered at Chandgat Police Station, Kolkapur District, in connection with this incident.

In an interview given by a relative of the deceased student, “My daughter also went on a trip to Kitwat Falls. She is safe. But my close relative, who went with her, drowned in the water,” he said while crying.