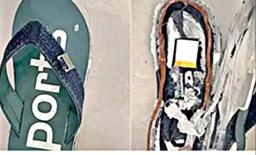 To select teachers in government schools in Rajasthan REED The exam is conducted. 16.51 lakh people had applied to write this exam which took place 2 days ago. Some of those who came to the examination center were questioned by the police as they were wearing shoes in a different way. It was then revealed that the shoes were fitted with Bluetooth. They were subsequently arrested.

Ajmer Police Officer Ratanlal Bargaw said, “There is a calling device in Bluetooth shoes. If anyone contacts from then on that question paper will go to him. He will give the correct answers. It is heard by a small Bluetooth device located inside the ear of the person writing the test. Our eyes do not know because the device is so small. This technology is used to try to engage in fraud. We also alerted the authorities of other districts when it came to light that similar scams had taken place in Bikaner and Ajmer. We are investigating. “

Jagdish Chandra Sharma, a police officer from Ajmer, said, “We will not allow people to wear shoes, shoes or socks during the next election. The price of these bluetooth shoes has been revealed to be Rs 6 lakh. We have arrested 40 people in this connection. We are investigating 24 people. ”

Meanwhile, the police investigation has revealed that the creator of these Bluetooth shoes is the owner of a training center for the exam. He is under serious investigation.

Previous articleThe situation of the match determines the bowling: ‘Hat-trick’ says Hershal Patel
Next articleTourists who disappeared while climbing Mount Falaza got in touch