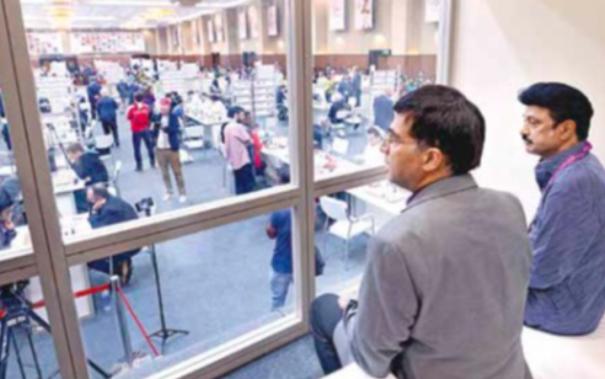 Chennai: On Day 3 of the Chess Olympiad, Team India also dominated the Open and Women’s categories. Indian team won against 6 teams in both categories.

The 44th Chess Olympiad is being held at Bourpoints Resort in Mamallapuram, near Chennai. On the 3rd day of the tournament, the Indian A team played against Greece in the open division yesterday. Harikrishna Pentala, Vidit Gujarati, Arjun Erikaisi and Sasikiran were included in India A team.

India B team played against Switzerland in their 3rd round. D. Gukesh, Sarin Nikhil, Pragnananda and Raunaksadwani were included in the Indian team. Raunak Sadwani, playing with the white pieces, on the 38th piece move Benziger tipped Fabian.

Gukesh defeated Georgiadis Niko on the 37th move, Sarin Nikhil defeated Bogner Sebastian on the 27th move and Pragnananda defeated Pellatier Yannick on the 38th move. With this, Indian B team defeated Switzerland by 4-0.

The Indian C team took on Iceland. In this, Ganguly Surya Shekhar ended the match against Gredarson Hajorvar Steyn in a draw in the 54th move.

In the women’s section, India A team faced England. Harika, who is three months pregnant, confronts Houska Joong Ka. The game ended in a draw on the 40th move.

R. Vaishali defeats Toma Katarsina on the 65th move. Taniasachdev drew the game against Yao Lan on the 51st move.

Padmini Raut ended her match against Alia Medina in a draw on the 28th move. Soumya Saminathan defeats Mariro Fariha in 75th round. Mary Ann Gomez, Chitra Devi Ardiani drew the game against Anastasia on the 43rd move. With this, the Indian B team beat Indonesia by 3-1.

PV Nandita was to play opposite Chiara. But Ciara pulled out at the last moment. Thus Nandita was declared victorious. With this, the Indian team defeated Austria with a score of 2.5-1.5.

In the 3rd round, the Norwegian team, featuring world champion Magnus Carlsen, played against the Italian team. Italy beat Norway 3-1.

Indian player Pragnananda says, “I wouldn’t say I played well in the 3rd round. On the 25th move I thought the game would end in a draw. Didn’t do well in the middle either. Finally, the opposing player’s clock has reached zero. I won because of this. I will pay close attention to the upcoming games as well.” Coach Ramesh says, “Pragnananda found success only by stumbling. Let’s take steps to correct the flaws in his game. 8 more rounds to go. Don’t keep thinking about the finished games,” he said.

Why was the game difficult?

Hari Krishna says, “The game was easy till the first 15 moves. Then Mastrovasilis Dimitrios began to challenge. A few brilliant moves in the finals led to the win. Every win is important for the team. The 2nd round was easy going. But in round 3 some moves had to be sacrificed.

It cannot be said right now that some of the top teams who were considered to be tournament winners are faltering. Because only 3 rounds have been completed. Only two more rounds will tell. “Usually the leading teams who suffer setbacks in the Chess Olympiad come back later,” he said.

BV Nandita, who is in the C section of the Indian women’s team, scored a hat-trick. Nannita defeated Hong Kong’s D Jing Jin Crystal in the first round and Singapore’s Emanuel in the second round.

Austria’s Ciara, who was to play against Nandita in the 3rd round yesterday, withdrew from the competition at the last moment. Nandita scored a hat-trick. Nannita says, “I don’t know why Ciara left. I had fully prepared for this game. I am not happy to get the point without playing. However, from a team point of view, this point helps the other players to play without pressure. There are no words to describe the success of the first two games. However, I think the first two wins will be a boost for the coming games. Success depends on how we perform on the day of the match and how deep we take the game. We have confidence in our team. We will try to play better in every game. The coming rounds are likely to be tough,” he said.