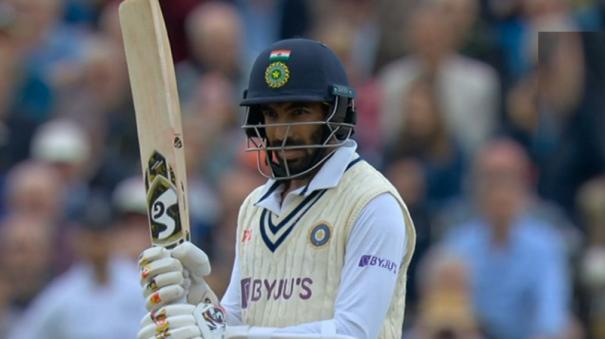 Bumrah, who made his debut as captain in the Test match against England, has set a new world record for the most runs (29 runs) in a single over in international Test cricket.

Last year, the Indian team participated in a 5-match Test series in England. At the end of the first 4 matches, India was leading 2-1. Later, the 5th Test was postponed due to the spread of the Corona virus. In this match which started in Birmingham yesterday, fast bowler Bumrah replaced Rohit Sharma as the new captain of the Indian team.

England won the toss and chose to bowl first. At the end of the first day of the match, the Indian team had accumulated 338 runs for the loss of 7 wickets. In this, Rishabh Pant scored a century and Jadeja was in the field with 83 runs.

In this case, the 2nd day of the game started today. Even though Shami was dismissed for 16 runs, Jadeja, who continued to show action, was bowled by Anderson for 104 runs. Subsequently, when it was difficult for India to cross 400 runs, Bumrah turned the 83rd over bowled by Stuart Broad into history.

He hit the first ball of the over for a boundary. The next ball was ‘wide’ and got 5 runs. The next ball came as a no ball and Bumrah tossed it to Ale for a six. After that, England bowlers threatened to hit hat-trick boundaries. He then hit a six in the 5th ball and a run in the last ball. He scored 35 runs in that over, excluding extras he played 29 runs. (4,6,4,4,4,6,1)

This is seen as a historic achievement. The reason is that in the last 2003 Johannesburg Test, Brian Lara scored 28 runs in a single over. This world record was held by Brian Lara for 19 years. A few players in between have equaled his record but none have been able to break it. After 19 years, Bumrah has now broken the world record with the title of highest run scorer in an over in Test cricket.