491 km between Ahmedabad and Mumbai. Vande Bharat train covered the distance in 5 hours 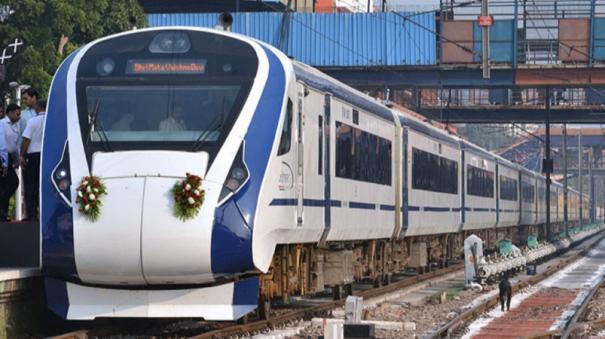 Mumbai: Trial run of ‘Vande Bharat’ train between Ahmedabad-Mumbai has been successful. This train is 491 km. The distance was covered in about 5 hours.

Indian Railways is planning to run Vande Bharat train between Ahmedabad in Gujarat and Mumbai in Maharashtra. As the works for this have been completed, a trial run was held on the 9th. Top officials of Western Railway said that it was a success.

During the test, the speed of this train touched 100 kmph in 52 seconds. It is noteworthy that the previous Vande Bharatrail took 54.6 seconds.

The train took 5 hours and 14 minutes to travel non-stop from Ahmedabad to Mumbai (491 km). Meanwhile, the train returning from Mumbai reached Ahmedabad in 5 hours and 4 minutes. The journey is estimated to be 6 hours if operated between the two cities stop-and-go. This train has a maximum speed of 180 kmph. Travel at speed.

Shatabdi and Tejas express trains are already running on the Ahmedabad-Mumbai route. The central government is also planning to run a bullet train on the same route. Bullet train at 320 kmph. Travel at speed. This will reduce the travel time to 2 to 3 hours.

Vande Bharat trains are manufactured under the ‘Make in India’ programme. Vande Bharat train runs between Varanasi and New Delhi. 16 A.C. Equipped with state-of-the-art facilities including coaches, modern seats and collision avoidance technology, the train can carry 1,128 passengers. It is noteworthy that the target has been set to manufacture 75 Vande Bharatrails by August next year.