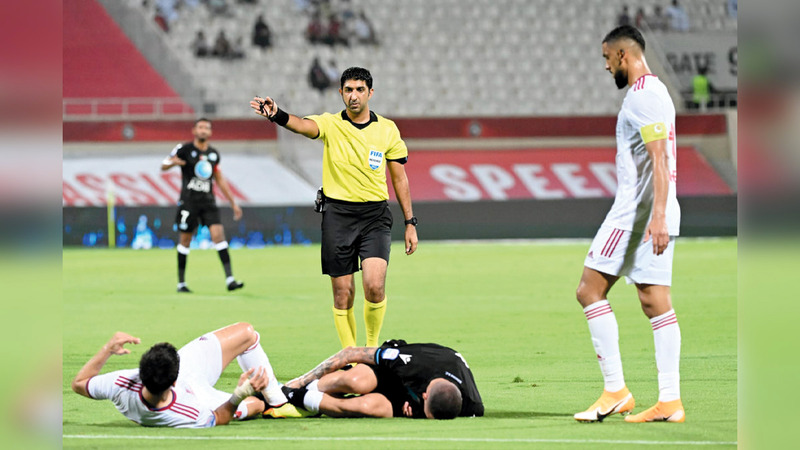 The second round of the ADNOC Pro League saw overtime extended for an extended period, averaging over six minutes.

The former international referee, Abdullah Al-Ajeel, attributed the increase in the extra time in “our league” to five cases behind it, including the “cooling” break that reaches two minutes according to the law, in addition to the process of recording and calculating goals for the referee, as well as substitutions, as well as injuries, as well as About the added time during the verification of cases of «mouse».

The urgent told “Emirates Today” that the audience and observers believe that the extra time that stadium judges calculate in matches exceeded the normal situation, and explained: “The extra time in the match should not exceed two or three minutes in normal cases.”

He added, “The period of rest or cooling, which takes two minutes, will be canceled after about a month from now, because the weather temperature will decrease.”

Some matches in the last round, such as the match between Al-Nasr and Ajman, which ended with the victory of Al-Ameed with two clean goals, an extra time that extended to the 96th minute, where Al-Nasr managed to score his second goal through the player Omar Jumaa, and the same is almost the same in the Al-Ain and Al-Dhafra match. Shabab Al-Ahly and Dibba, the extension to five minutes, and ended with Shabab Al-Ahly winning 2-1, as well as Al-Jazira and Khor Fakkan, which ended with Al-Jazira winning 4-2, which extended for more than six additional minutes.

In the match between Sharjah and Baniyas, which ended with Sharjah winning 3-0, the time was extended to an additional five minutes, and the match also witnessed a penalty kick, after the referee used the video referee technology, from which Sharjah scored his second goal, while the match between Al Wasl and Al Bataeh, which ended with a victory, was extended. “The Panthers” 2-1, to more than five minutes of extra time.

Abdullah Al-Ajeel continued: “My observation in the past two rounds in the league was that the stoppage time that I considered was not normal, but there is time (in lieu), as there are many cases in the last quarter of an hour in the match of muscle strains and injuries, and delays in playing due to The heat of the weather, given the fatigue that the players are exposed to, because the weather is not conducive to playing during this period.”

The 5 cases behind the overtime increase

2- The time spent by the referee in the process of scoring goals.

3- Substitutions of players during the match.

5- The time during which the ruling checks the cases of the “moulder”.