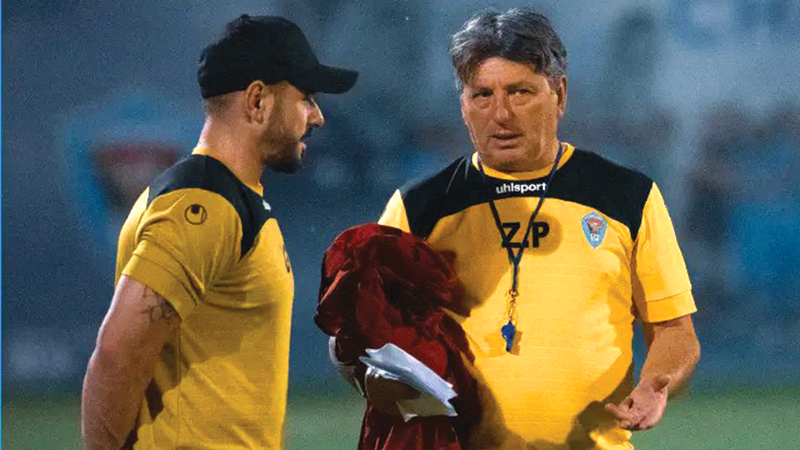 The preparations of the professional league clubs witnessed great activity in preparation for the next season 2022-2023, as the main focus was on resolving the files of the coaches who will lead the clubs, after only four clubs kept their coaches, while seven clubs contracted with new coaches, and three clubs are waiting to be announced Technical equipment for the new season.

Five clubs out of the remaining 12 clubs in the ADNOC Professional League next season, which are: Shabab Al-Ahly, Al-Wahda, Ittihad Kalba, Al-Nasr and Khorfakkan clubs, made changes to their coaches, including four coaches appearing for the first time in the professional league, while it was confirmed that a fifth coach appeared for the first time in the league, which is Serbian Zoran Popovic, who led Dibba Al Fujairah to win the First Division title.

The most prominent changes in the professional league clubs is the contract of Shabab Al Ahli with Portuguese coach Leonardo Jardim, to succeed Emirati coach Mahdi Ali, as Jardim has great experience, the most important of which is winning the Asian Champions League title with Al Hilal Saudi Arabia.

The changes include that Al Wahda contracted with Portuguese coach Carlos Carvalhal from Sporting Braga to lead the team, replacing Frenchman Issa Gregory, who had taken charge of training Al Wahda in October 2021, as a temporary coach during last season, succeeding Dutchman Ten Cat, and with the improvement of results, Gregory continued With the unit until the end of the season.

On the other hand, Al-Nasr contracted with German Thorsten Fink, to lead the team to replace Salem Rabie, who took charge of the team last February, succeeding Argentine Ramon Diaz, while the Kalba Union contracted with Iranian Farhad Majidi, for one season, to succeed Uruguayan Jorge da Silva, who left About the team at the end of his contract at the end of last season.

On the other hand, both Khorfakkan and the newly promoted Al-Bataeh made a change at the level of technical leadership with the help of coaches who have previous experience in the professional league, as “Al-Nour” announced his contract with coach Abdulaziz Al-Anbari, to replace Abdul Majeed Al-Nimr, who temporarily took charge last May, succeeding The dismissed Argentine Calderon, while Al-Bataeh club contracted with Brazilian coach Caio Zanardi to lead its first football team in its first participation in the ADNOC Pro League next season, succeeding Tunisian coach Tariq Al-Hadiri, who led the team to second place in the First Division, as he owns Zanardi has 48 years of previous experience in Emirati football, having previously coached the Khorfakkan and Al Nasr teams in 2020 and 2018.

Al Wasl, Al Jazira and Al Dhafra clubs are the most prominent clubs that have not decided the fate of their coaches next season, although the “Emperor” has a contract with Brazilian Auder Hellmann until the end of next season, and the same is true for Al Jazira with Dutch coach Marcel Kaiser, while Al Dhafra dispensed with the services of Moroccan coach Badreddine. Al-Idrisi has not signed a new coach yet.

For its part, only four clubs settled on retaining the services of their coaches in the new season, namely: Al Ain, who submitted an offer to renew the contract of Ukrainian coach Sergei Riberov, after leading the “leader” to win the League title and the Professional League Cup, and Sharjah also kept Romanian coach Olario Kuzmin, Who took over the training of the “King” in November 2021, succeeding Abdulaziz Al-Anbari, while Ajman renewed the contract of his Serbian coach, Goran Tevgodic, after he led the team to finish the season with 35 points, in seventh place in the professional league, and finally remains of the contract of Romanian coach Daniel Isila, a season with his club. Baniyas, and things seem stable about the coach completing his contract and leading the team next season.

Coaches appearing for the first time

Clubs that have not decided their coaches