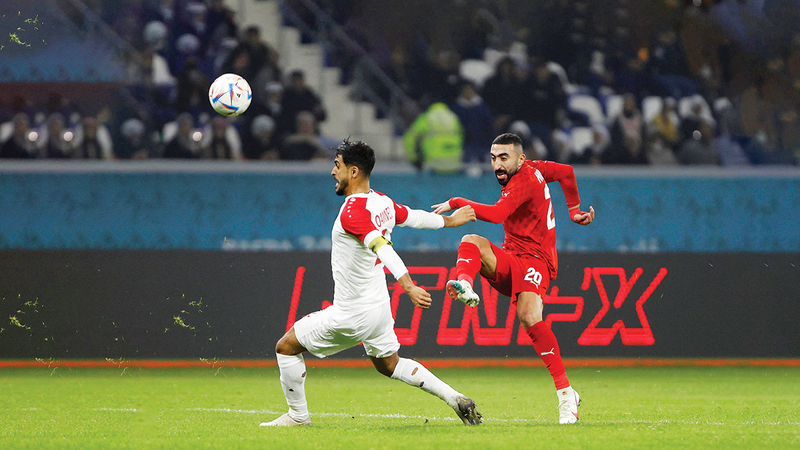 The Arabian Gulf Cup (Gulf 25), which concludes its competitions this evening in the Iraqi city of Basra, witnessed the meeting between Iraq and Oman. The holder of the previous championship title, Bahrain, relinquished its title and exited the championship competitions after suffering a loss to the Omani team in the semi-finals with a clean goal.

The Bahraini Reds finished the first round as the leaders of the second group, and were a strong candidate to reach the final match, had it not been affected by some circumstances that were present in the match with the Oman national team, which led to not qualifying for the final, and losing the title due to five factors, as follows:

The Bahraini national team played the Oman match in the semi-finals, and in the rest of the championship matches as well, with one striker, Abdullah Yousef, which contributed to controlling him strongly and reducing his danger, which negatively affected the offensive power of the Bahrain national team.

Bahrain coach, Portuguese Souza, preferred not to include the best players in the national team, Kamil Al-Aswad and Muhammad Marhoon, in the Oman semi-final match, which deprived the team of the technical return of its best players.

The Bahrain national team played most of the minutes of the confrontation with Oman without creating dangerous attacks on the goal, contenting itself with possessing the ball, which reduced the chances of scoring goals, in an unclear tactical manner.

The Bahraini Al-Ahmar defense reduced the danger of long-distance shots, which the Omani team enjoys, allowing a goal to be received from a long distance by Oman player Jamil Al-Yahmadi, seven minutes before the end of the match.

The Bahraini national team participated in the tournament with about five players, their average age is in their thirties, which made the team lose the physical fitness factor, in addition to the fact that the camp that preceded the participation in the tournament was not sufficient for optimal preparation.

Reuters – Basra / The Disciplinary Committee of the Gulf Cup Football Championship (Gulf 25), which is being held in Iraq, decided to suspend Mahdi Faisal Al-Humaidan, the Bahraini national team player, for three matches “because of an inappropriate movement”, after the end of the semi-final match against Oman. The committee said in a statement, “After watching a video clip showing the case presented to the committee, it became clear to it that the player Mahdi Faisal Al-Humaidan made impolite movements, so that the punishment was issued against the player based on Article No. (61) Paragraph 2 of the Disciplinary Regulations of the Gulf Cup Football Association.” She added that the player would also be fined.

Jamil Al Yahamdi scored a stunning goal seven minutes from time to take Oman to the Gulf Cup final with a 1-0 victory over defending champions Bahrain in Basra on Monday. As the original time drew to a close, a pass reached Al-Yahmadi outside the penalty area, and he fired it directly into the top corner of Sayed Jaafar’s goal.