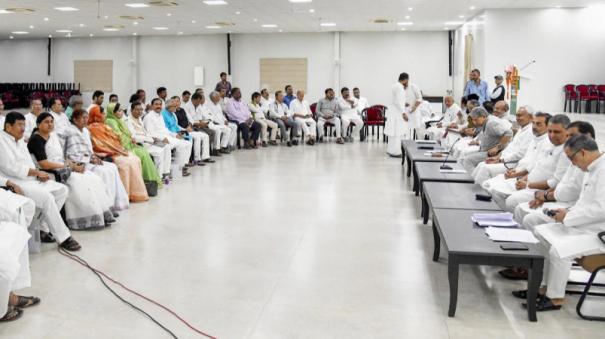 The BJP formed the government with a majority of 32 seats in the Manipur Assembly elections this year. Party leader Bren Singh was sworn in as the Chief Minister. BJP’s ally Nitish Kumar-led United Janata Dal (JDU) won 6 seats.

JDU chief Nitish Kumar broke his alliance with the BJP in Bihar last month and was re-instated as the chief minister to form a new government with parties including Lalu’s Rashtriya Janata Dal and the Congress. At the time, he made a sensational allegation that the BJP was trying to break the UN in Bihar. Also, 2 days ago Telangana Chief Minister and Telangana Rashtriya Samithi President Chandrasekhara Rao gave an interview together with him when he came to Bihar.

Meanwhile, 5 MLAs from Nitish’s party, Jaikisin Singh, Kursanglur Sanade Achab Uthdin, Thanjam Arunkumar and LM Ghat, met the Speaker of the Legislative Assembly the day before yesterday. They said that they are joining the BJP as per the 10th Schedule of the Constitution. The State Legislative Assembly Secretariat informed that Sabanayar has accepted this and approved the merger.

These 5 MLAs had planned to come to Patna yesterday to participate in the JTU National Executive Committee meeting and joined the BJP on the first day.

This is considered a setback for Nitish Kumar’s party as it is said that there is a plan to enter national politics in the upcoming 2024 elections.

At present 5 MLAs have joined BJP in Manipur and JTU’s strength in the entire Northeast region has shrunk to 1.

JTU National General Secretary Afaq Ahmed Khan has criticized the Manipur incident as showing what kind of political principles the BJP is following.