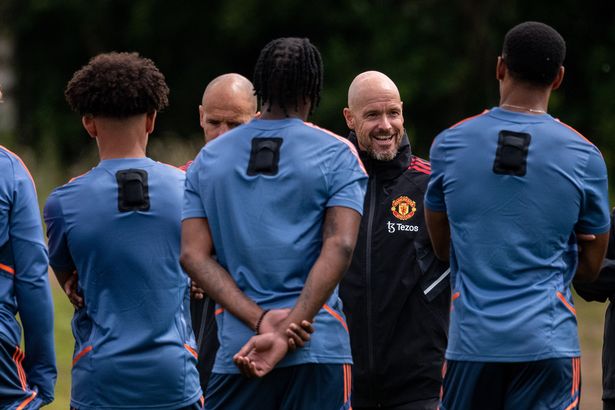 The Manchester United team inaugurated the new era under the leadership of its new coach, Dutchman Eric Ten Hag, who supervised the first training session yesterday evening at the Carrington Center, the team’s training headquarters, at a time when the team’s star, Cristiano Ronaldo and captain Harry Maguire, were absent. British “Mirror” 5 prominent observations in the team’s first training session under the leadership of the Dutch coach.

youth revolution
The newspaper stated that a group of young players are planning to leave a positive first impression on the new coach so that they can make their way to the starting line-up, and that coach Eric Ten Hag believed in his former club, Ajax, in young players, and that among the players who were keen to present themselves well For the coach were Charlie Savage and Alvaro Fernandez.

Ten Hag regains his youth
The Dutch coach regained his youth, as he showed his technical abilities in taming the ball and doing some technical glimpses during the training session, which confirmed that he is able to play well. He led him to win the Dutch Cup in 2001.

Self prove
The star Marcus Rashford has appeared while training hard and passionately in the new era that United entered with the new coach, and the newspaper indicated that Rashford wants to strengthen his position with the coach, and that the rest of the players such as Sancho and Aaron Bissaka are seeking to avoid the fate of leaving the team this summer.

Return loaned
United recovered a group of players returning from loan, led by Donny van de Beek, Axel Tuanzebe, Brandon Williams and Ethan, and also returned while Anthony Martial, and the newspaper reported that the latter can still revive his career with Manchester United after a disappointing loan period in Seville.

Coach’s message
The new coach gave a strong speech to the players for several minutes, and the Dutch newspaper “Manchester Evening News” reported that he was hoping to have a positive first impression and that the photos showed that he appears assertive at times and smiles warmly at others, and the newspaper indicated that the coach realizes that first impressions are The key is to get his message across to the players early.