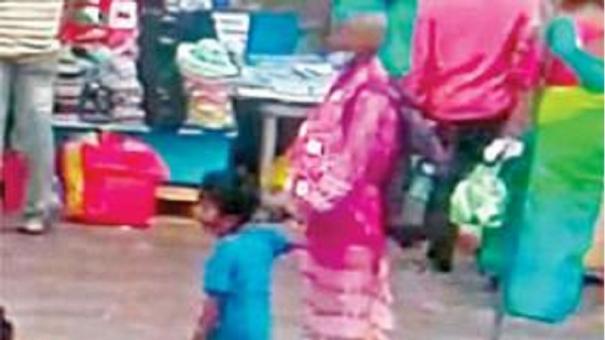 Thirumalai: Venkataramana hails from the Taminedu area near Tirupati. He has been making a living by giving Tirunam to the devotees in the 4 storey streets of Thirumalai. Meanwhile, Govardhan (5), a boy who was wandering around with his father last Sunday evening, was playing in front of the Temple of the Seven Mountains. Suddenly the boy was missing. They lodged a complaint at the Thirumalai 2nd police station as they could not be found anywhere.

Following this, the police inspected the surveillance camera there. Then, at 5.45 pm, the boy, Govardhan, who was playing in front of the temple, was picked up by a woman wearing a shaved pink suit, who spoke softly to the boy and took him by the hand. After that, the woman boarded the bus with the boy at the Tirumalai Balaji bus stand at 6.15 am and alighted at the Tirupati bus stand at 7.15 am. It is unknown at this time what he did after leaving the post.

The intensity of the task being sought

Police have been searching for the boy in and around Tirupati since yesterday morning. Police suspect that the boy may have belonged to Tamil Nadu, as he allegedly spoke in the language of the abducted girl. A complaint has been lodged at the Thirumalai 2nd Police Station. Three more teams have been formed and police are conducting investigations in Tirupati, Vellore and surrounding areas. Thirumalai police have asked the public to report any information about the boy to the nearest police station.