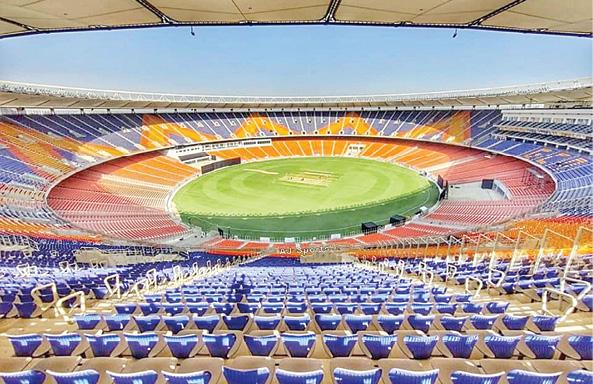 
The 3rd Test day-night match between India and England is played in Ahmedabad Modera The ground starts this afternoon.

England won the first Test and India won the second Test in a four-Test series between the two teams. The 3rd Test daytime series starts this afternoon at the refurbished Sardar Patel Stadium in Modera, Ahmedabad, with the series drawing 1-1.

The stadium was built to seat 1.10 lakh spectators. It has the reputation of being the largest cricket ground in the world. Previously, Melbourne Stadium in Australia was considered to be the largest stadium, designed to seat about 1 lakh fans. This record was broken by Sardar Patel Ground.

The Pink Ball Test match starting today at this special ground has caused a lot of anticipation. Only 50 percent of fans at the stadium are allowed to enter due to corona virus infection regulations. in that respect 55 thousand fans They are going to watch the match live. Both teams are eager to know what the nature of the pitch will look like since the renovated ground.

India are in danger of losing the remaining two Tests against England if they are to qualify for the final of the ICC World Test in June. Must win a game. Daytime Test Since crack bowlers are expected to play a key role. Umesh Yadav, who is fit with Jaspreet Bhumra and Ishant Sharma, is also likely to feature in the playing eleven. This is Ishant Sharma’s 100th Test match.

Kuldeep Yadav will be sacked as Umesh Yadav will be fielded. Akshar Patel, meanwhile, could be replaced by Hardik Pandya if the team management considers the need for a 4th fast bowler. This is because in the day-night Test against Bangladesh last year, the spinners bowled only 7 overs in total.

There may be some changes in the England squad as well. James Anderson, who did not play in the last game, could bang Jobra Archer. Markwood or Stuart Broad could feature as the 3rd cracker. Tom Bess could fill his place due to the absence of Moin Ali.

Rory Burns could be ruled out as Zack Crowley is fit at bat. Similarly it is expected that he will get Johnny Barstow instead of Dan Lawrence. Daytime Test Because in the end the balls are a little faster and swing more.

Thus there will be a tough challenge between the batsmen and the crackers at that time. Thus both teams may focus on handling the evening better.

In Russia, HIV incidence has halved in five years

Karthika Deepam July 21 Episode: ‘Karthik is in the process of getting rid of Deepani’ Monita Warning .. Anji Chapter Close!

If you troll, do it .. So what !! TV9 Devi Strong Reaction On Ariana Bold Interview .. Live Video

Daniela Darcourt gets emotional with metal singer Sebastián Palma: “I need you”

Warangal Srinu .. 'Sultan' is also in his hands!