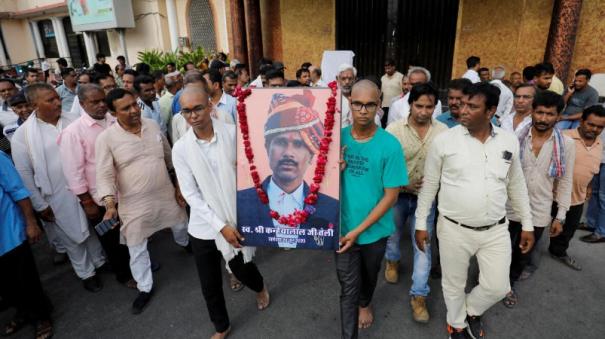 BJP spokesperson Nubur Sharma had criticized the Prophet of Muslims. As a result, he was removed from the party. Then Kannaiyya Lal, who ran a tailoring shop in Udaipur, supported Nupur Sharma on social media.

Due to this he was murdered on 28th. Mohammad Riaz Attari (38) and Kaus Mohammad (39) were arrested in this case. The case is being investigated by the National Investigation Agency (NIA).

The two accused who were produced in the court of Udaipur yesterday have been given 14 days judicial custody. Both Moseen and Asif have been arrested by the NIA in Udaipur for helping Kannaiyya’s murder.

All of them are lodged in the high-security Ajmer Central Jail. One of Kanniya’s killers, Kause, was linked to Pakistani militants. Under their guidance, since 2015, he has changed the minds of Muslim youth in Rajasthan’s Tonk, Ajmer, Udaipur, Jodhpur, Rajsamand, Bhilwara and Pandi districts and sent them to militant movements. The NIA is also investigating whether Kaus got financial help for this.

Meanwhile, a protest was held in front of Rajasthan’s Ajmer Dargah on June 17 following Nupur Sharma’s criticism. Maulvi Faqar of Ajmer, Tajim Siddiqui, Riyaz from Gujarat and 4 people from Jaipur have been arrested. Cases have been reported against them for giving religiously violent speech. They have chanted that those who criticize their Messenger should be beheaded. Kannaya’s killers have also recorded the same slogan in their video. Therefore, it is being investigated whether these four are related to Kannaya’s murder.

Like Kannaiyya, there are reports that there was a plan to kill one more person in Udaipur. Nitin Jain (35), a resident of Udaipur’s Sector 11, sells tires for vehicles. He, like Kannaiyya, mistakenly supported Nubur on social media on June 7. Nitin was arrested in the complaint against him and released on bail. Following this, 9 people have threatened Nitin so far. Since then, Nitin locked his shop and house and stayed at his relative’s house. Thus, he is believed to have escaped.