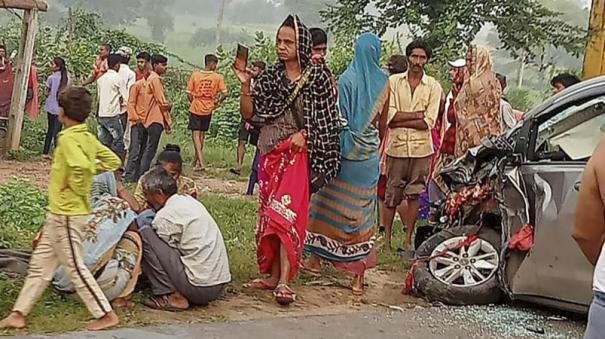 Ahmedabad: 6 people died when a car rammed into devotees in Gujarat’s Aravalli district. 5 others were injured.

The famous Ambaji temple is located in Banaskantha district of Gujarat. About 185 km from Ahmedabad. Far away, near the Rajasthan border, this temple is considered one of the 51 Shakti Peethas. Thousands of devotees visit this temple on foot during the month of September.

In this case, devotees were walking to this temple yesterday morning in Krishnapura village of Aravalli district. Then a speeding car hit them. 6 devotees died in this. 5 others were injured. They have been admitted to hospital. Police registered a case against the driver under sections including careless driving and arrested him.

Gujarat Chief Minister Bhupendra Patel has condoled with the families of those who died in the accident. He has also announced a compensation of Rs.4 lakh each. A financial assistance of Rs.50 thousand has been announced for the injured.