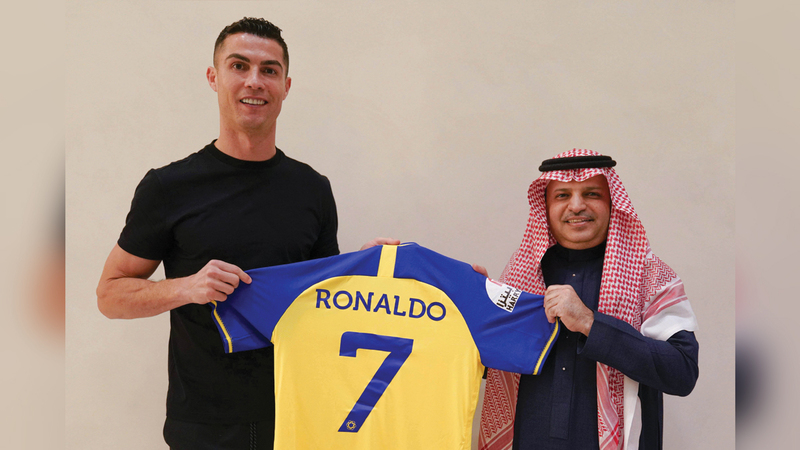 The Saudi club Al-Nasr’s contract with the legend Cristiano Ronaldo contributed to an unprecedented historical impact on the “Al-Alamy” electronically, after the Saudi club’s social media platforms witnessed a great development.

The Al-Nasr account on “Instagram” is the most developed, after the number of followers of the club’s official account increased from 800 thousand followers to more than 6.3 million followers, just two days after contracting with the “Madeira missile”.

Ronaldo published a picture of him with a Al-Nasr club shirt on his official account on “Instagram”, which achieved more than 31 million likes, which is the number that was achieved in just 24 hours, so that the image jumped and entered among the most liked images in the list of “Instagram” for the year 2022, and Ronaldo turns into the most personal It is on the list of the most admired photos on Instagram in 2022.

Cristiano Ronaldo said in the post: “He is eager for a new football league in a different country. The vision with which Al-Nasr Club operates is very inspiring, and I am excited to join my teammates so that together we can achieve more successes.”

Ronaldo also added the Al-Nasr Club account in Arabic and English, among his followers on “Instagram”, as the British newspaper “Daily Mail” revealed that Ronaldo’s profit rate for each post on “Instagram” amounted to 1.7 million pounds sterling in 2022.

And the Al-Nasr Club account on the communication sites stated that “signing with Ronaldo will not only inspire the club to achieve greater successes, but will also inspire the league, our nation and the future of our generations, our sons and daughters to be the best version of themselves.” And the account continued, welcoming Cristiano Ronaldo to his new home, Al-Nasr Saudi Arabia.

On the other hand, the situation did not differ with regard to the victory account on the social networking site «Twitter», which rose from two million followers to 3.4 million followers in less than 12 hours after the announcement of the signing with the Portuguese star.

The demand for the purchase of the Al-Nasr club shirt, number 7, which Ronaldo will wear, witnessed a great demand, as Al-Eqtisadiah newspaper reported that the shirts that were offered sold more than 5,000 shirts in one day, by about two million Saudi riyals.