6 technical notes on the national team’s performance against Lebanon, most notably the absence of offensive effectiveness 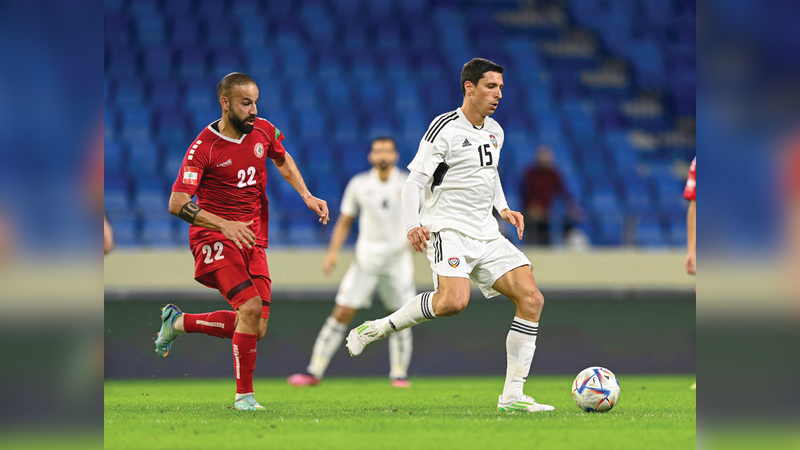 The national football team’s match against Lebanon, the day before yesterday, at Al Maktoum Stadium in Al-Nasr Club in Dubai, which Al-Abyad won with a clean goal scored by substitute player Sebastian Tigali, recorded six technical observations on the performance, most notably the absence of offensive effectiveness.

The national team had gone through the last rehearsal before heading to the Iraqi city of Basra tomorrow to participate in the 25th Arabian Gulf Cup, scheduled for the period from 6 to 19 January, as it will play in the second group that includes the teams of Bahrain, Qatar and Kuwait.

Despite the moral victory that the team achieved in this match, it suffered a lot during most of the match, and found it very difficult to reach Lebanon’s goal.

The match enabled the coach of the Argentine national team, Rodolfo Aruabarina, to stand on the readiness of his players from all sides, to identify the strengths and weaknesses of the team, and to work to address the mistakes and negatives that accompanied the team’s performance in the match before entering the atmosphere of the Arab Gulf Cup, especially since the team will perform a number of One of the daily exercises in the city of Basra, before playing his first match in the championship against Bahrain, the defending champion, on the seventh of next month.

The six technical observations are the need for the starting line-up to be more homogeneous among its elements, the slowness in preparing the balls, the lack of ferocity and strength in the play, as well as the absence of diversifying the sources of danger on the field, in addition to the team’s lack of effectiveness and serious offensive solutions, with the exception of only the attack from which Tigali scored a goal. The only match in the “79th” minute of an attack led by the player Hareb Abdullah, and Tigali followed it into the goal, while the defensive system was the most prominent positive point in the team, and a number of players appeared in the match, such as Ahmed Jamil, Hareb Abdullah and Majed Hassan, and they played well.

And the coach of the Argentine national team, Rodolfo Arwabarina, tried 17 players during the Lebanon match, after he also pushed in the second half with six players, who are: Tigali, Ali Saleh, Khaled Al-Hashemi, Badr Nasser, Muhammad Abdel Basset and Abdulaziz Heikal, in order to find out the levels of the largest number of players selected in the official final list that It included 23 players.

The technical staff of the national team chose 23 players out of 25 in the official list traveling to Basra, while the players Hassan Al-Mahrami and Hussein Mahdi were excluded.

For his part, the national team manager, Yasser Salem, described in media statements that the national team’s match against Lebanon represented a good test for the national team in all respects, through which the coach stood on the formation, roles, mistakes and performance of the players through the participation of 17 players who participated in the match, stressing that the victory he achieved The team over Lebanon is good in terms of morale, before heading to Basra, hoping that things will be better in Basra.

In turn, national team player Badr Nasser said that he is happy to join the first team, and that this is a source of pride for them to represent the country in an important tournament such as the Arab Gulf Cup, indicating that they promise the sports street to present their best, to give 200%, and to do their best.

1- The defensive system is the most prominent positive point.

4- Lack of ferocity and strength in play.

5- The absence of diversifying the sources of danger on the field.

6- The team’s lack of effectiveness and offensive solutions.

• Arwabarina tried 17 players during the Lebanon match, after pushing 6 players in the second half.