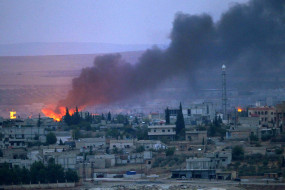 Digital Desk, Damascus. In Syria, 600 people were killed in June and October 2017 during US-led airstrikes targeting Islamic State (IS) group positions in the northern province of Raqqa. This information was given by the officer monitoring the war.

US-led bombings in the former IS capital Raqqa killed 600 people from 140 families over four months, according to a report published on the website of the Syrian Observatory for Human Rights on Tuesday, Xinhua news agency reported. According to the report, their bodies were found when mass graves were opened after the defeat of IS in Raqqa.

The UK-based observatory said the total number of people killed in US-led airstrikes was much higher, as evidence of more than 6,000 bodies was found in 28 mass graves. He further said that most of the victims were killed during US-led air strikes targeting IS positions in Raqqa between 2014 and 2018, while the rest were killed by IS after its capture of Raqqa in 2014.