66 Grand Slams in one frame: Photo shared by Roger Federer 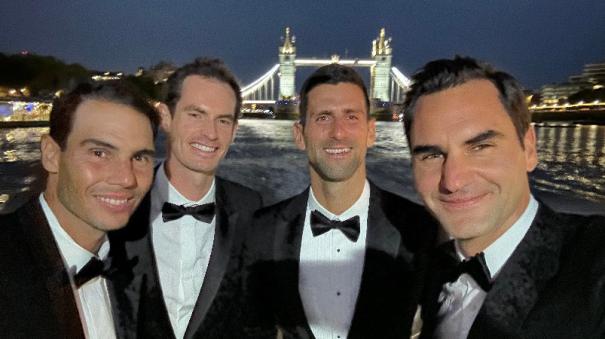 London: Swiss tennis player Roger Federer shared a photo of 66 Grand Slam titles converging in one photo. That means Nadal, Andy Murray, Djokovic and Federer are in the picture. All four of them have won 66 Grand Slam singles titles.

Federer, 41, will retire from international tennis on Sunday. He had recently made an announcement about it. He had said that the Laver Cup series in Britain would be his last series. Many had bid farewell to him through their congratulatory messages.

In this case, Nadal, Andy Murray, Djokovic and Federer, the four great players of modern day tennis are participating in the current Laver Cup series for the European team. Nadal and Federer are playing in the doubles category.

The four went out for dinner as it was Federer’s last series. Federer had then shared a selfie photo taken on his cell phone on his social media page. Now fans are celebrating it.

heading to dinner with some friends @RafaelNadal @andy_murray @DjokerNole pic.twitter.com/2oYR3hnGaZ