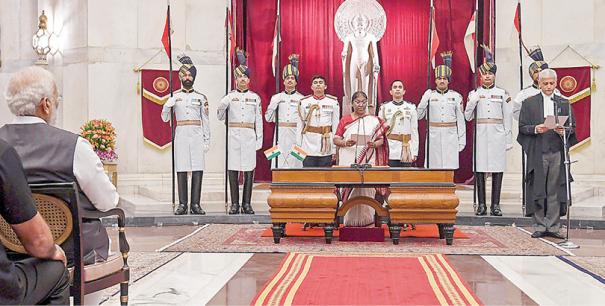 New Delhi: Udai Umesh Lalit was sworn in as the 49th Chief Justice of the Supreme Court yesterday in the presence of Prime Minister Narendra Modi and others. He was administered the oath of office by President Drarubathi Murmu.

NV Ramana assumed charge as the 48th Chief Justice of the Supreme Court on April 6, 2021. He retired yesterday.

Subsequently, Udai Umesh Lalit was sworn in as the 49th Chief Justice of the Supreme Court in a program held yesterday evening at the President’s House. He was administered the oath of office by President Drarubathi Murmu.

On the recommendation of former Chief Justice N.V.Ramana, President Dirupati Murmu appointed U.U.Lalith as the 49th Chief Justice of the Supreme Court on August 10.

Chief Justice U.U. Lalit said, “In the matter of listing of cases, priority will be given to 3 important aspects namely simplicity, clarity and transparency.

At least one constitutional session of the Supreme Court will be arranged to function throughout the year. Steps will be taken to create a separate system for listing urgent cases to prevent conflict between lawyers and registration officers,” he said.

YU Lalit was born on November 9, 1957 in Solapur, Maharashtra. UR Lalit, son of UR Lalit, who served as an Additional Judge in the Nagpur Branch of the Bombay High Court, was enrolled as an advocate in 1983.

Specializing in criminal law, he practiced as an advocate in the Bombay High Court from 1983 to 1985. He later moved to Delhi and became a senior advocate of the Supreme Court in 2004.

With this, a former lawyer became the 6th person to be directly appointed as a judge of the Supreme Court.

U.U. Lalit, who took charge as the Chief Justice yesterday, will remain in this post for the next 74 days only. It is worth mentioning that he is going to retire on November 8.