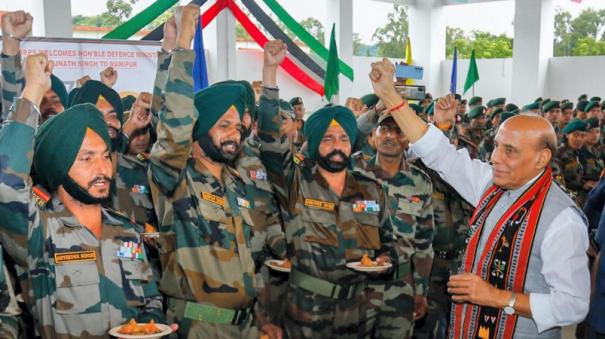 Bengaluru: Union Defense Minister Rajnath Singh participated in the Saurya Sandhya program to commemorate the valor and adventures of the Indian Army held in Bengaluru yesterday (January 15) on the occasion of the 75th Army Day.

Rajnath Singh, who started his speech by wishing everyone on Army Day, K.M., who served as the first Army Chief of Independent India, And that Gariappa hails from Karnataka. He also recalled his vital contribution in strengthening the Indian Army.

He also praised the Armed Forces, who have been working with the primary duty of ensuring regional integrity since independence till date, for being capable of overcoming any situation. Especially the soldiers working in the western and northern regional borders are overcoming all the challenges successfully. The minister also said that they are upholding the ancient heritage of the country through their unparalleled bravery and sacrifice.

Internationally, India is a country with a strong military and the Indian Armed Forces, which exemplifies valor, loyalty and discipline, is the country’s strength and pillar of hope, he said.

He mentioned that there have been dramatic changes in society, politics and economy in recent times. He also pointed out that security challenges are changing accordingly. To counter these, drones, underwater drones and weapons are now being used by artificial intelligence, he said. So this era is an era of technology. Because technological advancements have increased these challenges, said Rajnath Singh.

He pointed out that the central government has always focused on developing powerful equipment in the defense sector and said that it is currently playing an important role in the development of the country. He proudly said that it is because of our strong defense that India has become the most powerful economy in the world. Rajnath Singh also recalled that in the last financial year, India had achieved record foreign direct investment of USD 83.57 billion.

The event is being held as part of the 75th Army Day. This is the first time that this program is being held outside the capital city of Delhi to increase public participation and make the youth aware of our army. Army plane and helicopter adventures were also organized in this event.