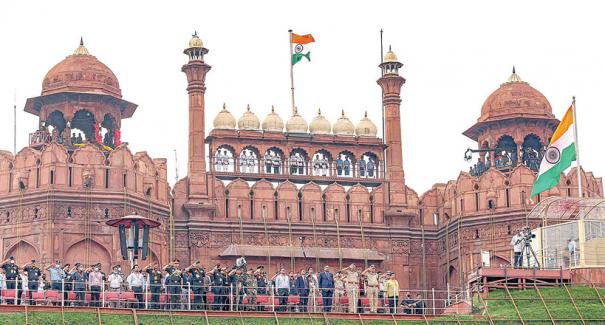 New Delhi: Prime Minister Narendra Modi will unfurl the national flag at the Independence Day ceremony to be held at the Red Fort in Delhi tomorrow. Around 7 thousand people are expected to participate in this festival, more than 10 thousand policemen have been engaged in security work in Red Fort.

The Central Government had already announced that the country’s 75th Independence Day will be celebrated as Amudham Festival across the country. The central government has also requested the state governments to celebrate this festival in a special way.

The Prime Minister also appealed to the people of the country to fly the national flag at their homes from August 13 to 15. For this, the central government made some amendments in the regulations for hoisting the national flag.

In particular, the rule that the national flag should be flown only during the day has been changed and it has been announced that it can be flown at night as well.

Apart from that, common people also hoisted the national flag at their homes and offices yesterday.

Prime Minister Modi will hoist the national flag and deliver a speech at the Independence Day ceremony to be held at the Red Fort in Delhi tomorrow. Around 7000 people including Union Ministers, MPs, Army Commanders and dignitaries have been invited to participate in this event.

The entire Red Fort will be brought under the control of the Delhi Police and 10,000 policemen will be deployed for security.

5 km around Red Fort. Flying kites, drones etc. in the perimeter airspace is prohibited. Police said a team has been formed to monitor it and devices have been installed with the help of DRDO and other security agencies.

Delhi Police Special Commissioner (Law and Order) Dipendra Pathak says, “Prohibitory order 144 has already been issued in Delhi. Those who fly kites, balloons, Chinese lanterns etc. till 15th will be punished. No object is allowed to fly in the airspace. Radars have been installed to monitor this,” he said.

Meanwhile, the Delhi Police seized 2,200 live ammunition near Delhi’s Anand Vihar bus stand yesterday. In this connection, 6 people have been arrested and are being investigated. Also, the police who are patrolling the entire city to prevent any untoward activities, are also conducting intensive vehicle checks.

Prime Minister Modi’s 100-year-old mother Heeraben lives in the suburbs of Gujarat’s capital, Gandhinagar. He hoisted the national flag at his home yesterday. Also, he presented national flags to the boys. He enjoyed waving the national flag along with them. The video and photos are going viral on social media.

Indo-Tibetan Border Police personnel unfurled the national flag at the Himalayan region of about 14,000 feet on the India-China border in Uttarakhand.

Prime Minister Modi posted on Twitter yesterday, “It is a matter of pride that the national flag is being hoisted in every house across the country. It is heartening to see a large number of people participating in the National Flag Movement. Please upload your photos on https://harghartiranga.com/” he said.