8 massacred in one week in Jammu and Kashmir, including Hindus – Emergency consultation led by Amit Shah 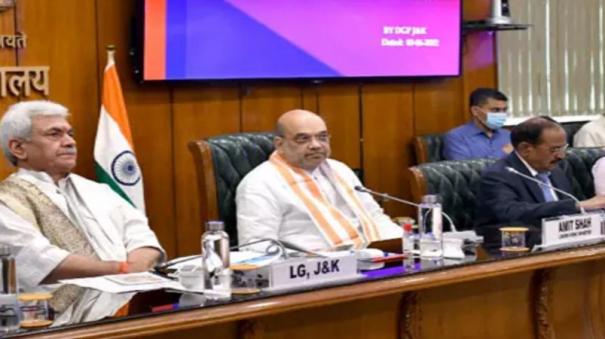 New Delhi: Eight people, including Hindus, were shot dead by militants in Kashmir in a single week. Following this, Union Home Minister Amit Shah yesterday held emergency consultations with Jammu and Kashmir Deputy Governor Manoj Sinha and senior officials of the security forces on improving security there and eradicating terrorism.

Union Home Minister Amit Shah last month held a review meeting on the arrangements for the Amarnath pilgrimage and the security situation in Kashmir. He ordered the security forces to work together with the police to fight terrorism.

In this context, militant attacks targeting Kashmiri pundits and foreign workers have increased in Kashmir.

The day before yesterday, a mysterious person broke into a bank in Kashmir’s Gulkham area and shot dead a Hindu manager. Over the next few hours, militants shot dead two foreign workers returning from a brick kiln in central Kashmir. One of them died. Another who was critically injured is receiving intensive care.

A school teacher was shot dead by militants in central Kashmir last Tuesday. He is also a Hindu.

Before that 3 policemen and TV. The actress was also assassinated by militants. They are all Muslims. A few days ago, a Hindu civil servant was shot dead by Lashkar-e-Taiba militants.

In the last one week alone, a total of 8 people have been shot dead by militants. Hundreds of Kashmiri Pandits staged protests in several places yesterday, including in Srinagar. They have appealed to the government to ensure their safety. Many of the pundits are staying in camps for security. Many are starting to leave Kashmir.

In a video posted online by a Pandit, he said, “The government has taken us hostage. They did not allow us to leave our homes. We are in fear. We ask the Deputy Governor to allow us to go to Jammu as there is a lack of security in Kashmir. ”

Political parties have condemned the attack on foreign workers, accusing it of completely disrupting law and order in Kashmir.

The People’s Democratic Party (PDP) tweeted, ‘Law and order has been disrupted. But the government is still saying that normalcy has returned to Kashmir.

Condemning the terrorist attack, the National Convention Party said, ‘The continuing massacre in Kashmir, where security forces are increasingly concentrated, shows the complete failure of the state. We express our concern over the situation in Kashmir, which is heading towards a state of crisis. There is no security for anyone here.

The People’s Congress Party has condemned the attack on foreign workers and called for an end to the series of massacres.

Minister Amit Shah is said to have instructed top officials at the meeting to take drastic measures to protect pundits and expatriate workers in Kashmir and eradicate terrorism completely.