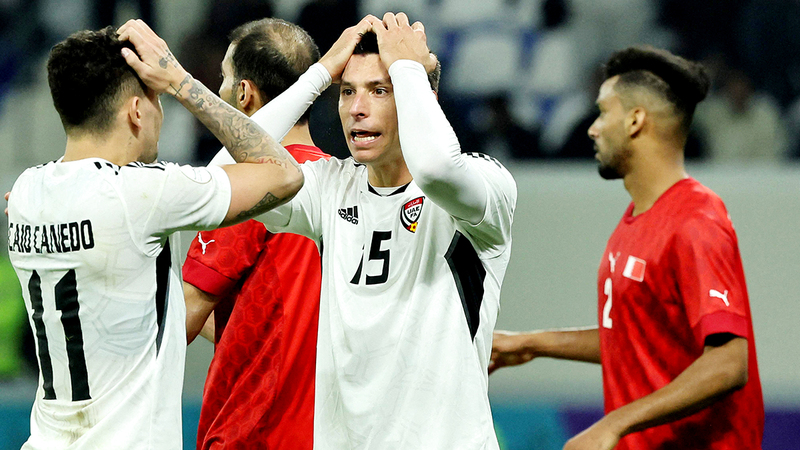 The loss of the first national football team against the Bahrain national team, the day before yesterday, with two goals to one at the start of the “White” campaign in the second group in the Arab Gulf Cup “Gulf 25”, which is currently being held in the Iraqi city of Basra, represented a great shock to the sports street, which was expecting A strong and honorable start for the team in this tournament, especially since the coach confirmed more than once that the team’s goal in participating in the tournament is honorable representation and competition for the title, but the team started without an identity in its first appearance.

The Al-Abyad fans wished the national team to appear with a strong personality that expresses UAE football, and indicates the seriousness of the desire to win the Gulf title, which the national team had previously won twice in the history of its participation in the tournament.

Although the national team started the match well during the first minutes, and was able to control the course of the game, but then suddenly retreated, and began to disorganize the lines, which provided an opportunity for the Bahraini national team to excel and collect match points.

Al-Abyad suffered a lot in this match, and now needs to quickly address the mistakes that the players made during the match, before the confrontation against Kuwait the day after tomorrow, in the second round of the second group.

Coach Aruabarina confirmed, during the press conference after the match, that there were mistakes committed in the match that caused the loss, indicating that the team did not appear at the level they aspired to, but he confirmed that he had great confidence in the players to overcome the loss.

Pinto: The loss of “White” and “Blue” increases the strength of their meeting

Abu Dhabi – Emirates Today/ The coach of the Kuwaiti national team, Portuguese Roy Pinto, described the confrontation that brings together the “blue” team against the national team “white” tomorrow, in the second round of the second group matches, as the last chance, indicating that the loss of the two teams in the first round at the hands of Qatar and Bahrain increases the strength of the match. tomorrow.

Pinto said in a press conference: “The next confrontation against the Emirates will be the last chance, and every team will seek to compensate for its first loss. Kuwait has no choice but to win and collect the three points, in order to preserve the hopes of competing for one of the two cards to qualify for the semi-finals.” .

The 9 reasons that caused the loss

1- The national team appeared in the match without an identity and missed the strong collective performance.

2- The fatal defensive mistakes that caused the two goals of the Bahraini national team.

3- Loss of winning papers in the absence of essential and influential elements such as:

Mabkhout and Ali are safe.

4- Lima’s sudden absence from the match confused the coach’s plans.

6- The lack of an organized attack industry and the absence of the final touch.

7- The first Bahraini goal confused the players, especially the defense

9- The Bahraini national team started to be more organized on the field, and took advantage of two chances

He scored two of them.