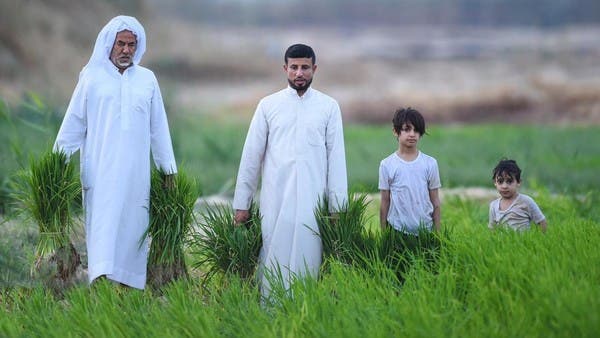 For more than 150 years, the Al-Salem family has owned a farm that produces Al-Ahsa rice, where the grandparents of the Saudi youth, Zaki Al-Salem, passed on this legacy, which has been alternated by generations until the present time.

In his interview with Al-Arabiya.net, Al-Salem revealed that the farm produces vegetables, grasses and legumes such as okra, sweet, sesame, watermelon, colored juh and colored corn, and he continued by saying: “Al-Ahsa’i rice is considered an indispensable food, and it benefits the human health due to its nutritional elements.” .

He pointed out that purchase orders come from all regions of the Kingdom and abroad, and by 2017, the farm had become the largest producer of Al-Ahsa rice, and Al-Salem used the transformational process, as he extracted from Al-Ahsa rice flour, as it is rich and healthy in making bread, cakes and others.

Al-Salem was brought up by his father, who loved farming, but when the Saudi young man set out for his new job outside the walls of his farm, he felt that his soul did not leave his favorite place, deciding to leave his job behind him in 2016, and return to Al-Ahsa rice and develop it so that it does not disappear.

And the farm turned into an attractive tourist area, after it opened its doors to all visitors, and the Saudi farmer revealed that the free entry came to facilitate the visit of people, in order to introduce them to food products from the beginning of their cultivation to the time of their harvest.

He continued, “It is proud that Saudi Arabia is unique in providing food that is ripe on its lands, at a time when many countries have been unable to cultivate Al-Ahsa rice, and they have not been successful.” Al-Salem expressed his pride and gratitude to the Saudi government for the continuous support he received, while stressing that they are keen on the permanence of this profession and its transmission to the next generation.